Before the advent of GPS, IFR flight plan routes were fairly limited. Pilots generally had to stay on airways or remain within the standard navaid service volumes if venturing off airway. Now a huge number of pilots are able to file /G on their IFR flight plans, meaning that the airplane has GPS and/or WAAS (Wide Area Augmentation System) with en route and terminal capability. The pilots of these airplanes rightfully want to take advantage of their equipment. An IFR-certified GPS is capable of navigating accurately between any two points making route planning much more flexible. So, how does a pilot file IFR direct using GPS? The easiest way is to just put DIRECT in the route portion of your flight plan form, but is it the correct way? Let’s investigate. 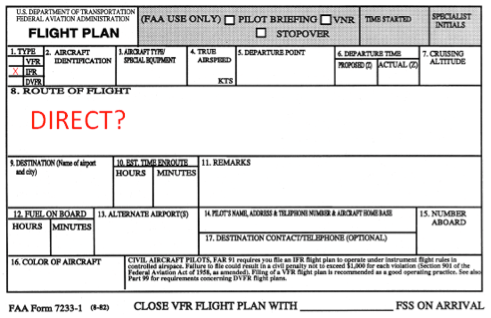 What does the FAA have to say?

Guidance for filing IFR direct using GPS can be found in chapter 3 of the Instrument Procedures Handbook (FAA-H-8261-1A) beginning on page 26 and in the Aeronautical Information Manual in section 5-1-8. The following three paragraphs are a summary of that information:

To begin with, a direct route will only be approved in a radar environment. In many areas of the country this is not an issue. The pilot, however, must be aware that filing an altitude at or near the OROCA (Off-Route Obstruction Clearance Altitude) may not guarantee radar coverage. In that case, the pilot should expect to be assigned a different altitude or route.

Additionally, the pilot should plan to use departure or arrival procedures where appropriate. In other cases, the pilot is to plan the route to begin and end at a fix or navaid. Practically, you simply choose a fix or navaid along your route to file at each end of your flight plan. If the flight is to cross one or more center boundaries, there should be at least one fix within each center. These fixes must be within 200 nm of the center boundary. This simply ensures that each center controller knows exactly where you are headed (assuming your destination is outside of that controller’s airspace) and can maintain positive control of your flight.

Finally, the flight should be planned to avoid all restricted and prohibited areas by at least 3 miles. If the planned route has a bend in it for any reason, that point should be filed as part of the route.

Acceptable flight plan fixes include intersections, navaids, and VOR radial/distances. A fix that appears on an approach chart but not on the enroute chart is not acceptable because it may not be in the air traffic control computer.

Let’s look at a simple example. The flight plan is from KMCB to KLUL. To provide a comparison, I first planned the flight via airway. This flight would be 79 nautical miles long. The filed route would be MCB V222 LBY V455 TEGBE. See the chart excerpt below. 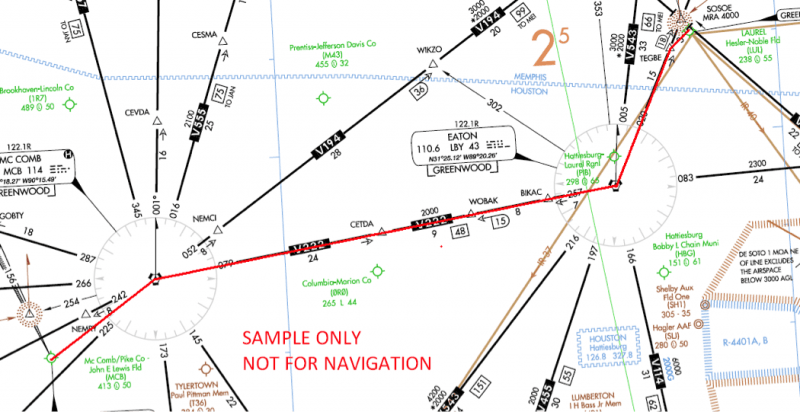 The straight line distance between the two airports is 73 nm. Notice that our route crosses a center boundary. We should have at least one fix on each side of that boundary. Adding two fixes would also comply with the requirement to begin and end our route over a fix. We will not come within 3 nm of the restricted area on the chart, so it does not affect our plan. The route I would choose to file is MCB TEGBE. This route is still only 73 nm long, and it complies with all the requirements discussed above. 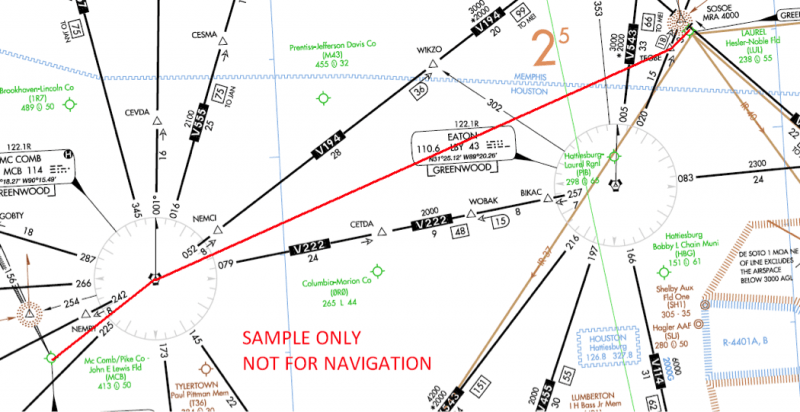 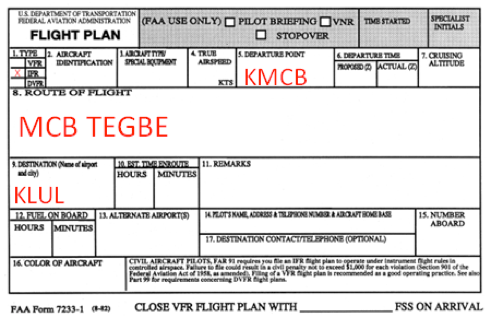 We originally asked how a pilot should file IFR direct using GPS. It turns out the FAA has quite a few things to say about it. Fortunately, compliance with the AIM and the Instrument Procedures Handbook is very simple. In our example, we added less than one mile to our flight and ensured that air traffic control will know exactly what we intend to do. On the other side of the coin, ATC will usually work with you when you file DIRECT; and there are times when it makes more sense. In the end, it is important to realize that there is often more than one way to accomplish a particular flight. The pilot must be able to apply his or her knowledge of regulations and procedures to make each flight a success from the planning phase to the parking phase.

HPA training articles are available for download at: https://www.flyhpa.com/category/training/