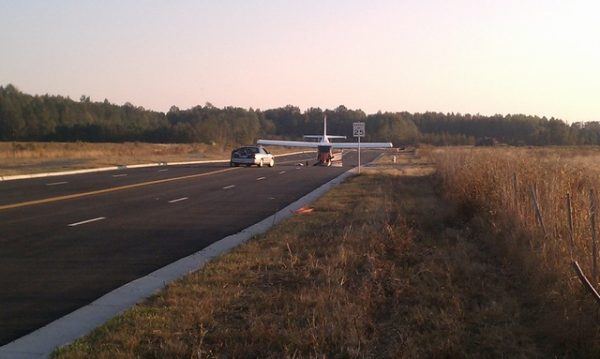 This is the story of an aircraft incident – not an accident. An accident, according the NTSB definition, is a flight operation in which “any person suffers death or serious injury, or in which the aircraft receives substantial damage.” So technically, if you (and your passengers) walk away uninjured from a forced landing after an engine failure, the amount of damage sustained determines whether the NTSB considers this an accident. The blown engine, or any of the scrapes, bends, dings and dents incurred after touchdown may not be enough to “upgrade” the incident to an accident.

Hopefully, knowing in advance that this story has a happy ending won’t lessen the impact of its lessons. As with most of these stories, there is a chain of smaller causal events to be followed that ultimately caused the larger incident – like tracing the Nile back to its source, or a hurricane back to a butterfly fluttering its wings. So, sit right back and you’ll hear a tale…

A colleague of mine (let’s call him Keith) owns a retractable Cessna 182, and he uses it in his aeronautical consulting business. One blustery winter day in February, he flew the plane to an uncontrolled field in eastern North Carolina with a passenger on board. The strong, variable winds were not favorable that day for the single runway, and Keith knew that he would need to use his best crosswind technique to cope. “I was focused on getting the plane on the runway, but honestly, never considered that I needed to keep flying after the wheels were down,” said Keith. On rollout, the adverse winds were strong enough to lift the tail of the aircraft, causing the two-bladed prop to slightly impact the tarmac.

Lessons? For starters, Keith admits that maybe he shouldn’t have flown at all that day, knowing that the winds at the destination were so unfavorable. Further, the C182 tends to be a bit nose-heavy, and the W&B that day with two passengers up front and none in the rear might have exacerbated that tendency. Couple that with a strong gusty wind that may have momentarily turned to a quartering tailwind and – prop strike. “Maybe if I kept more back pressure on the rollout, it might have made a difference,” Keith laments.

Generally, aircraft engines that experience a sudden drop in RPM due to prop strikes require a mandatory disassembly and inspection of all rotating engine components. Consequently, Keith did not fly his aircraft home that day; he called his insurance company and started the process of looking for a shop to inspect his engine.

The Overhaul from Hell

As part of his business, Keith often attends aircraft industry trade shows; AirVenture (Oshkosh), NBAA, etc. At one such show, he visited the booth of an engine overhaul business (“Acme”), was impressed by their promises of rapid turn-around, and filed them away mentally. After the prop strike, Keith contacted Acme to get a quote for the mandatory inspection and further inquired as to what it would cost to upgrade the inspection to an overhaul. “I was getting close to TBO anyway; this looked like a golden opportunity,” says Keith. It was, because the insurance company was already obliged to cover the costs of engine removal and installation. Acme was signed on for the work, and the engine was removed and shipped to their shop.

As the promised time for the completion of the overhaul neared, Keith began to anticipate the day he could fly his plane back home. (I know, because my calendar had a series of cancelled appointments to fly him to North Carolina in my aircraft.) Keith kept getting positive status reports from Acme about the overhaul progress, only to be disappointed by the next report. The Acme manager Keith dealt with apparently couldn’t be trusted to tell him what was really going on, and Keith had no idea why. Financial problems? Personnel issues? Keith said at the time, “I believe (he) is a very poor manager and has no idea when things will get done, yet he promises yesterday. Worse – I realized this week that he flat out lies.” The engine was eventually delivered back to North Carolina, 3 months later than promised.

Every good story has an interesting character or two. This story has “Luther”, the good ol’ boy mechanic at the airport where Keith had the prop strike. Pilots who have used Luther in the past have described him as competent and knowledgeable, but loquacious. Now that the engine was back, Keith was calling Luther for status updates on the installation, and getting more than he bargained for. From an email I found, Keith wrote, “He’s been talking for 30:25 now. I’m not sure he’s winding down yet. Good grief.” Clearly, Keith sent the email while Luther was still talking his ear off.

Keith was finally able to fly the plane back home, but the troubles with Acme continued. Another email from Keith, “It appears the carburetor has to go back to Acme. Check valve is bad and It’s leaking. The overhaul from hell continues…”

The carburetor issue kept the plane on the ground for a while, but the C182 was airworthy again in October, and Keith was itching to fly. What ensued is best described in Keith’s own words:

Today was a fantastically beautiful day… Clear skies, light winds, and 65 degrees. I went to the airport at around 1:30 to check the plane, clean up the hangar, fuel the plane, and do a short flight to make sure all is ok before flying to the Boston, MA area… After fueling the plane, doing the remaining preflight checks, I took off, enjoying the early stages of fall colors. I reduced power to the top of the green arc on manifold pressure going through 800 feet and flew north. At 1300 feet I made a roughly 90-degree left turn…toward (a nearby airport) to do a landing, then return. I started to reduce the RPMs for a slow cruise. The engine began to run a bit rough. As a result, I turned back toward (my home airport). The engine got rougher as the seconds ticked by. I made a radio call… saying ‘Nxxxx is returning to the airport, engine is running rough, this is not practice.’ I receive two replies saying they were going to get out of the pattern and the airport was mine. A few seconds later the cockpit was filled with smoke and the engine was silent. After decelerating to best glide speed and shortening the range to possible landing sites I was assessing, my next radio call was, ‘I’m not going to make it.’ By the time that call was made I was at 800 feet. The airport was not an option and I had selected a road in the back of an industrial park, the last few blocks of which had no buildings. It was clear that making the road was in question. … I kept the flaps and gear up until I was sure I had the road made. That was quite low. I put the gear handle down and lined up on the road (missed the yellow line by around 4 feet). Alas, the main gear locked, but the nose gear did not. Shortly after the nose wheel touched it collapsed… The plane slid to a stop on the road. I was fine.

Next radio call I heard was ‘good job buddy’ from one of the pilots that had cleared the airport, then some chatter about where I was and that it appeared I should be ok. I called to say I was. For the next four hours, I stayed away from the media trucks with some help from the police. I talked to (local) Police, Fire Department, and Rescue. I also talked to State Police, a few people at the FAA, and the insurance company. What a day.

The training worked. My only real question about options is: If I had put the gear down a few seconds sooner would the nose wheel have locked and would I have still made the road? I walked away, that’s a blessing. It’s also a blessing that I was alone. 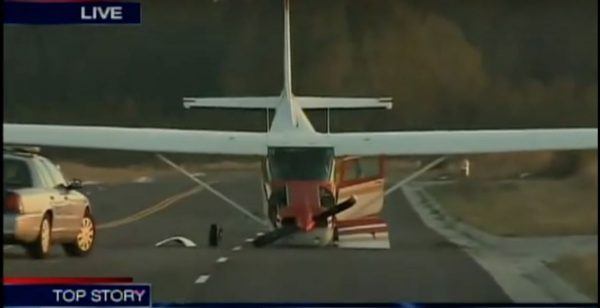 Of course, the most interesting lessons here involve the post-mortem inspection of the blown engine. There were only 52 hours on the engine since its overhaul when it failed. The aircraft had a fresh annual. What happened?

The culprit was the cylinder #1 connecting rod, which became disconnected from the crank when a bolt sheared, punching a couple of holes in the crankcase in the process. Keith’s recorded engine monitor temperatures confirm this, but also mysteriously showed cylinder #4 stopped firing first. There was no explanation for this. 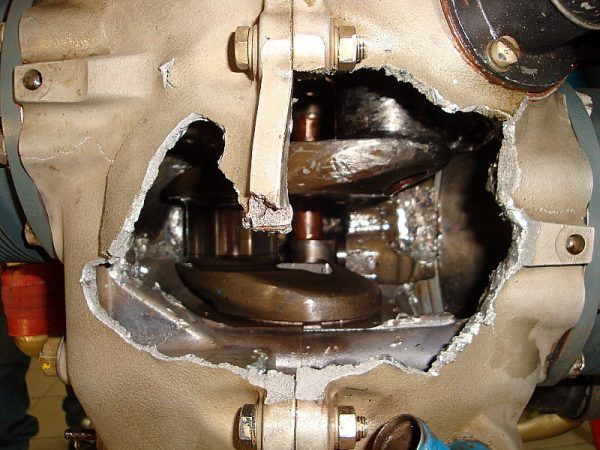 Surprisingly, no smoking gun was found in the analysis to prove that the “overhaul from hell” was directly responsible. Acme was indeed experiencing some financial trouble during this period, but there is no evidence that they used non-PMA approved parts to cut costs. The connecting rod attachment point uses “stretch” bolts, a type of engine bolt that is purposely torqued until it deforms to maintain its clamping force. Because they deform, the bolts can’t be re-used. Improperly torqued stretch bolts may deform to the point of inviting premature failure, but this is hard to prove. There is at least circumstantial evidence that the working conditions at Acme during this period were not conducive to performing the highest-quality work.

Whatever the cause, the lesson is that infant mortality for ANY engine; new or reconditioned, is a real thing. Infant mortality is a reliability engineering term that refers to the early failure rate of some products, as illustrated by the “bathtub curve” shown below. In the early life of products adhering to this hazard function (and aircraft engines do), the failure rate is higher than normal, but rapidly decreases as early sources of potential failure – defective parts and installation errors, for instance – are surmounted. Keith’s engine failure occurred at the back end of this curve; most of these types of engine failures happen during the first dozen hours or so. To stack the odds in their favor, pilots should follow the break-in instructions for engines meticulously, remain vigilant for any warning signs, and stay close to airports during the break-in period. 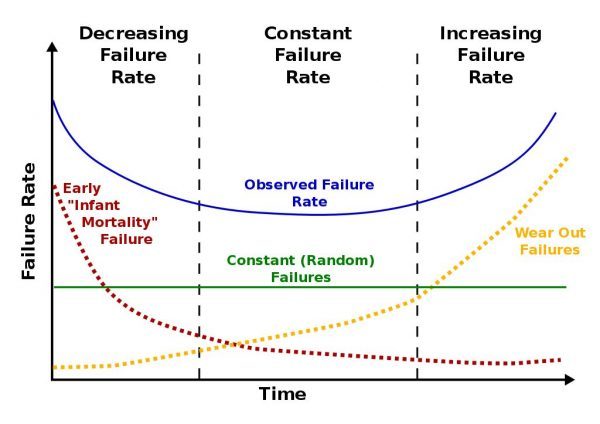 Believe it or not, to repair the engine Keith went back to Acme, recently re-organized as the “New Acme”, minus some the former employees Keith had dealt with. The repaired engine was installed in February, a full year after the original prop strike occurred. A new, shorter three-bladed prop replaced the old two-blade. Keith was flying within a few weeks, and has put hundreds of hours on the engine since, without incident.