Weather Back to Basics: Clouds

Weather Back to Basics: Clouds

We have weather because of the star at the center of our solar system, the SUN. Basically, the uneven heating of the earth surface produces rising thermal columns that cause uplifting of air that brings with it moisture and as it rises to the cooler altitudes, gives off heat, which causes further rising and henceforth, cooling and reaching their dew point then turn into clouds. By now you have flown under enough clouds that when you fly under a cloud, you run into turbulence or otherwise known in pilot jargon, as potholes in the sky. Clouds are beautiful phenomena that can take our breath away as we fly. Clouds tell us how stable the air is at a given altitude. For example, flat clouds can tell us that the air is stable and piled up clouds says that the air is unstable. As pilots, we are able to decide whether it is a good day to fly according to the clouds.

In 1803, an English scientist by the name of Luke Howard developed the cloud classification we know today. Howard’s purpose was to classify the clouds by their general appearance or shape and height above the ground as the list below describes. 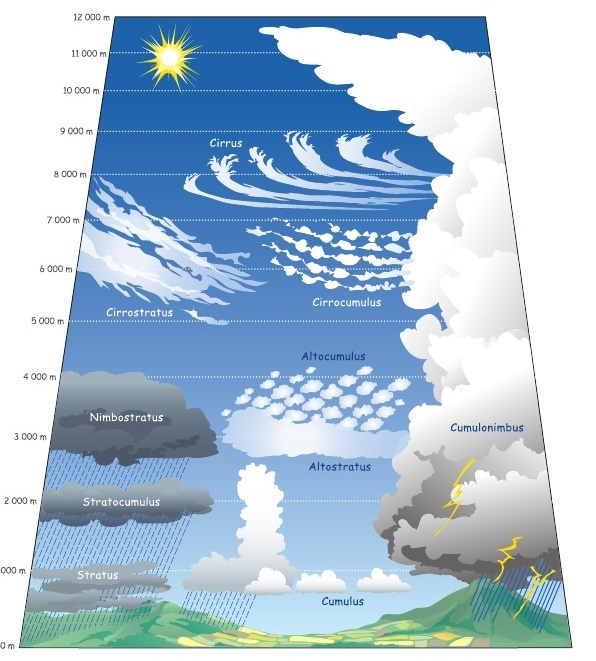 The Cirrus or Cirro clouds are found at higher altitudes, and their bases are commonly located at around 20,000 feet. Alto clouds are found at a mid-level with bases at around 6,000 to 20,000 feet. Clouds lower that 6,000 feet are known as low clouds or state or stratus. Another term that you may be familiar with is “nimbo” or “nimbus,” which means that a cloud is producing precipitation. Furthermore, a cumulonimbus cloud makes thunderstorms due to their shape of being piled or lumpy. However, a Nimbostratus cloud is a low layered cloud that is producing rain. The cumulonimbus clouds are extremely hazardous to pilots and usually avoided. 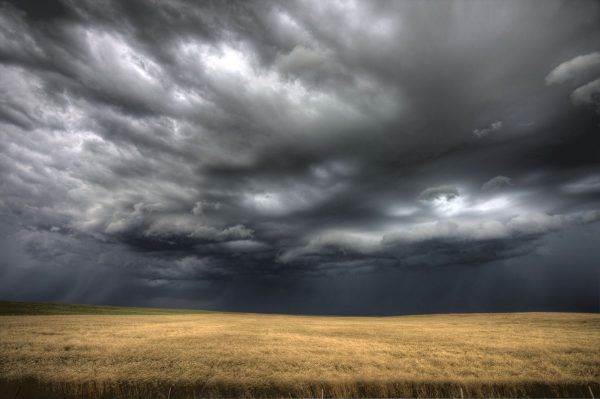 When you see the towering cumulonimbus cloud banks ahead of you, perhaps rising to FL400 or above, trouble awaits. Uplifting and downdrafts, hidden by the beautiful opaque clouds are carrying rain, hail, and potentially killer winds. Also, producing more of the same, by sending strong downdrafts or even microburst’s to the ground where they fan out and become uplifted creating another cumulonimbus cloud or clouds. Unless you are equipped with a Forward Looking Infrared (FLIR) Heads up Display (HUD) can lead to you to clouds can grow rocks (i.e. uncontrolled or controlled flight into terrain). Here is where planning, anticipation and responding can save the day if you have not had the training for IFR flight.

In 2012, a demonstration flight with 45 souls on board left Halim Perdanakusuma International Airport in Jakarta, Indonesia. The flight was going well until the pilots heard “TERRAIN AHEAD, PULL UP.” Unfortunately, the pilots did not see any mountains, but only clouds and turned off the terrain and awareness warning system (TAWS) after six blurted out warnings. Minutes later, the aircraft hit the mountains of Mount Salak at 6,000 ft, killing all on board. It was found during the investigation that the pilots did not have the correct aeronautical charts, leading to misjudging the terrain because of the cloud cover. This accident could have been prevented if the pilots had better planning, anticipation, and response to what the aircraft was telling them as well as better understanding of what the clouds were telling them. 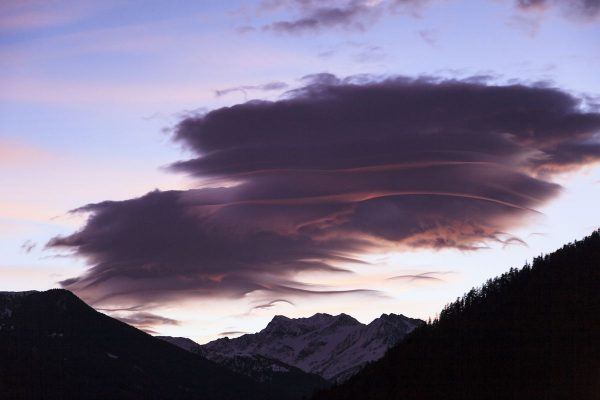 The aircraft accident leads to discussion about lenticular clouds. Lenticular clouds have been known as a flying saucer or lens shape. They are shaped when air flows along the earth surface and it encounters objects. Lenticular clouds are commonly formed in the mountain terrain, but have been seen on other areas where high objects are found, for example sky scrapers. The wind and water vapor that create lenticular clouds is moving, but the cloud stays in the same location. The reason is due to uplifting and horizontally moving wind that is carried with it moisture that is unseen until it reaches its cooling dew point to form the cloud. The wind and moisture continues on its arch downward where it is transferred back into invisible water vapor, thus leaving the cloud in the same location. 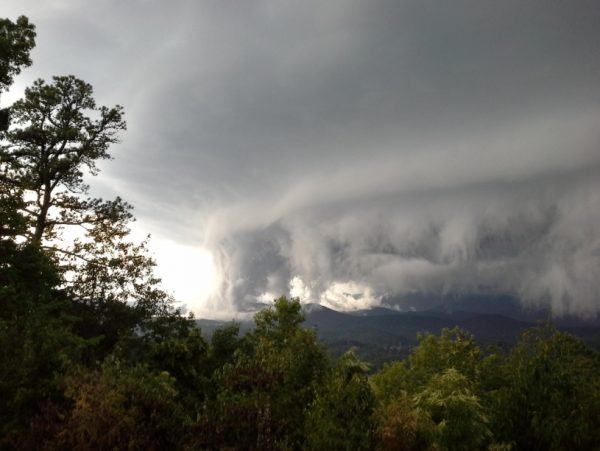 The towering cumulonimbus clouds or thunderheads can also form into what is known as a wall cloud (pictured above) that creates spiraling air up into the bottom of a cumulonimbus cloud. A wall cloud typically produces some of the largest tornadoes due to the spiraling effect. Wall clouds are extremely dangerous to people on the ground and to pilots flying all types of aircraft. In the picture above taken in the Smokey Mountains of North Carolina, you will see that the wall cloud is producing updrafts and downdrafts. An example of updrafts and downdraft air movement would be mammatus or mama clouds. As a pilot, you are probably aware that the best way to see clouds is to take a scenic flight, but be aware of the dangers associated with the beautiful phenomena that we love so much and take care not to stray too close and end up being tossed around like pizza dough. Plan, anticipate, and respond when you are sightseeing. Fly safe and enjoy the view and try not to ingest any mountain goats hiding up in the clouds!

Dr. Pamela Witteman is a freelance academic writer with many years of flying experience.