What To Do When Murphy Shows Up, Part II

On the long list of what can go wrong in a G1000 cockpit, a Garmin Display Unit (GDU) failure is less of a Maalox moment than other failures. A non-proficient pilot, though, might be lost when the PFD or MFD goes black. Here’s how to handle the situation. (Note: This article will only deal with the traditional G1000 configuration with one PFD and one MFD)

The GDU and the Failure

The reader may have seen the subtitle for this article and thought, “GDU failure? What does the Global Defense Union have to do with flying and why do I care when they fail?” (Please, hold all laughter till the end) A Garmin Display Unit, or GDU, is the name Garmin gave the computer that runs the Primary Flight Display (PFD) and the Multi-Function Display (MFD). They are commonly referred to as screens, so pilots may be more familiar with the term “screen failure” instead of “GDU failure.” Screen failure seems to flow off the tongue a little better, but it’s a computer, so there has to be a technical term for it.

Like the AHRS/ADC failure, most pilots won’t ever experience a GDU failure, but, it is always best to maintain proficiency with any and all possible failures. The best thing to do is to go up with an instructor and do a few instrument approaches with one or the other GDU failed. Change it up a bit for the different approaches, as well. Fail the MFD on one approach, then fail the PFD on the next approach. The scan on the MFD failure is much easier since everything moves to directly in front of the pilot, but since when does Murphy’s law ever mean easy?

Regardless of which display fails, the procedure is the same. For this article, I’ll just discuss an MFD failure (Note: With a PFD failure, the only difference will be the pilot will have to turn his head to the right and scan the MFD). In training flights with my students, I usually like to fail the MFD first since, most of the time, he will just sit there and continue scanning his instruments. The thought process is, “Okay, I lost my moving map, but I still have all my instruments in front of me. I don’t need to do anything, I’m fine!” WRONG. It might be important to know if the engine is running properly too….

I usually try to give the failure when we are close to a descent. If the student starts the descent and still hasn’t done anything, I usually ask some leading questions to get him thinking about power and engine gauges (or he might start the descent, realize he can’t see his tachometer, then start to wonder how to read engine RPM with a dark MFD). I always brief the student on the failure and what to do on the ground, but, in the midst of an instrument approach, he will sometimes forget.

Now, the light has usually come in my student’s mind that, “Oh yeah, I need to see my engine information! What color was that button? Oh yeah, the red display backup button!” Bingo! I love seeing light bulbs come on. 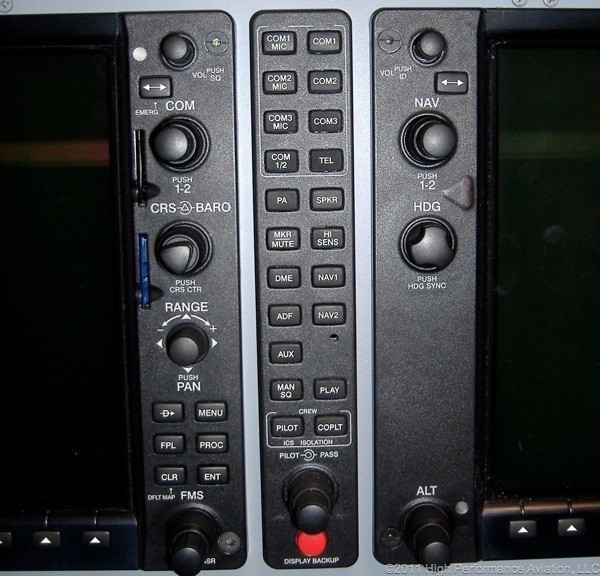 The red display backup button is at the bottom of the GMA Audio Panel, right below the intercom volume button. In a simulated display failure, all a pilot has to do is push that button and that will move the GDUs into reversionary mode. In this mode, both the PFD and the MFD will display the same information: all the flight instruments along with the engine indicating system along the left hand side. The giant moving map is lost, but the inset map is still available. In this instance, a pilot would have to choose between the inset map and the flight plan because they are both displayed in the same place on the screen.

Now, the way Garmin designed the system, if a GDU actually does fail, then the system will automatically go to reversionary mode. In an actual failure, all the display backup button is used for is, simply, backup in case some wires aren’t doing what they are supposed to. Otherwise, the system should enter reversionary mode on it’s own and the pilot doesn’t have to do a thing! Isn’t technology great?

All pilots hope to never ever have a failure, but it still happens. Hopefully, parts one and two of this article series will help keep pilots a little safer out there.