What To Do When Murphy Shows Up, Part I

I was in hard IFR, 400 foot ceilings and a mile visibility. I had just passed the initial approach fix on the ILS. On this particular ILS approach, I had to follow an arc that led me to the final approach course from the initial approach fix. The approach was briefed and loaded into the G1000 and I thought all I had to do was just keep the needles centered. Then, BAM! Red X’s started showing up everywhere on my PFD. Altitude, airspeed, vertical speed, all gone. The attitude indicator and my heading information were both inoperative as well. Panic began to set in as the green ILS needle began to center, but pointing straight up. Where was I supposed to look? How did I know what my altitude was? I thought I was a good instrument pilot, but now it felt like I was tumbling into an unusual attitude! What was I supposed to do? With a smile, my instructor pushed the pause button on the Frasca Mentor and asked, “So what’d you think?”

Up to this point in my G1000 instrument training, everything had been full panel. We were now up to that dreaded time in my training known as “partial panel” instrument flying. Those words strike fear into the most proficient instrument students, causing the weaker ones to tuck tail and run.

So, really, what is the big deal? Having done countless partial panel approaches since then, mostly as a flight instructor, they don’t seem that scary anymore. The standby airspeed and attitude indicators, along with the standby altimeter provide sufficient information to the pilot, while the compass and moving map on the MFD, together, give ample heading information. The navigation needle still works on the PFD, so that capability isn’t lost. Most pilots should see this as a non-event, not an emergency, life threatening situation.

Immediately following G1000 instrument training, most pilots are very proficient at flying partial panel. As time goes on, though, proficiency is lost so that when an actual failure occurs in “real life,” things don’t go quite as smooth as they did back in training. 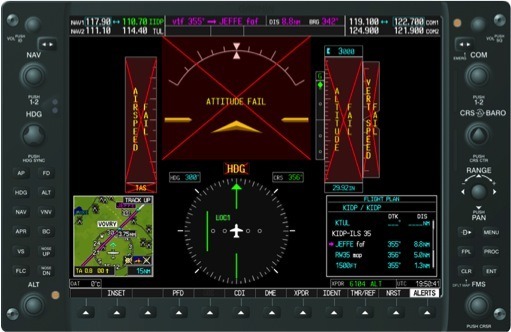 Some Helpful Tips in Handling Murphy

The best way to get that proficiency back is to look up an instructor and go fly several approaches with AHRS/ADC failures. Don’t just fly all ILS approaches, either. Those are the easiest with this particular failure, but easy isn’t always the best. Non-precision approaches cause pilots to think more and use more available resources in the airplane.

One must remember the heading information on the MFD has a delay to it. This leaves the pilot with two options: timed turns or compass turns. Using standard rate, three degree per second turns will lead to rolling out on headings properly. Again, the compass should not be ignored, but the airplane’s resources should be utilized.

One last thing that must be addressed when discussing partial panel instrument flight is a brief talk about unusual attitudes. As with steam gauge unusual attitudes, when there is an AHRS/ADC failure, recovery should always be executed using the standby airspeed indicator. The standby attitude indicator is not trustworthy at this point since a steep enough bank or pitch attitude would cause the gyro to tumble. If needles are spinning wildly, the airspeed indicator will report the pitch attitude: accelerating means nose low, decelerating means nose high. If the standby attitude indicator is functioning, that can be used for bank information. If not, the MFD can give you an idea of which way the airplane is turning as well as the compass, though the compass would be harder to read.

Again, the best thing to do is go find an instructor to practice with. With the exception of engine problems in IMC, an AHRS/ADC failure is the most dangerous situation a pilot could face. Maintaining proficiency will cause this to be a non-event, just like going outside to pick up the paper every morning.