EAA Airventure Oshkosh has long been referred to as “Mecca” for pilots. The EAA claims it is the “World’s Greatest Aviation Celebration”, where both pilots and performers gather for a week-long celebration of almost every type of aviation you can think of. From homebuilts to warbirds, the airport is lined with thousands of airplanes all there for the same purpose. Air traffic controllers in pink shirts come from all over the country to man remote stations and work in “The World’s Busiest Control Tower”. It is quite the experience for any pilot, and I’m glad I was able to be a part of it this year.

I had planned on flying to Oshkosh for over a year. I found out about a type group called the “Cessnas2Oshkosh”, who fly in formation as part of a mass arrival to Oshkosh every year. Flying a Cessna 182T G1000, I was inclined to go with them for the mass arrival. 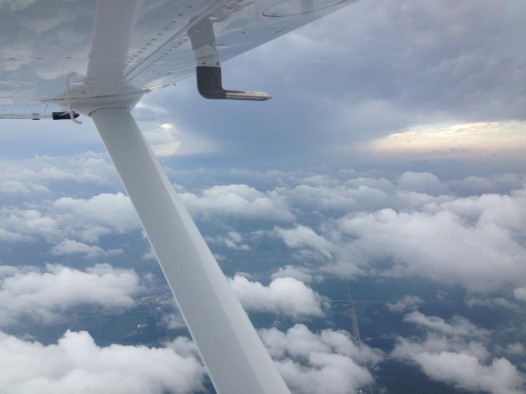 I left Houston on Friday, July 26th and headed to Juneau, Wisconsin where the Cessnas2Oshkosh stage for the mass arrival. Unfortunately, the weather didn’t look like it wanted to cooperate. There was a long line of embedded thunderstorms spanning from Texas to Iowa. I received a full briefing from flight service, and learned it was moving east at about 25kts. When I took off, it was 200 miles west of our course and I figured we could get to St. Louis before it got in our way. The airplane was equipped with NEXRAD, but I know better than to put too much confidence in NEXRAD because of delays. Luckily, we were able to stay dry most of the flight to St. Louis and did a visual approach into CPS.

After having lunch at the FBO, we headed out once again. I got another 2 hours of actual IFR and finally made it to Juneau, where it was sunny but surprisingly cold. The temperature had dropped about 40 degrees since St. Louis. Coming from Houston, none of us had thought to bring a jacket.

The next morning, we did a full flight brief and lined up to take off together. We flew in flights of 3, with the first two airplanes landing on 35L (normally 35 at the airport), and the 3rd airplane landing on 35R (the parallel taxiway). I was position 3, so I had the entire runway to myself. We made it to Oshkosh safely and had a lot of fun doing it. The next morning, the Oshkosh newspaper mistakenly published a picture of the Bonanza arrival and titled it “Cessnas2Oshkosh taxi in…” We couldn’t figure out who was more embarrassed – the Cessnas or Bonanzas. 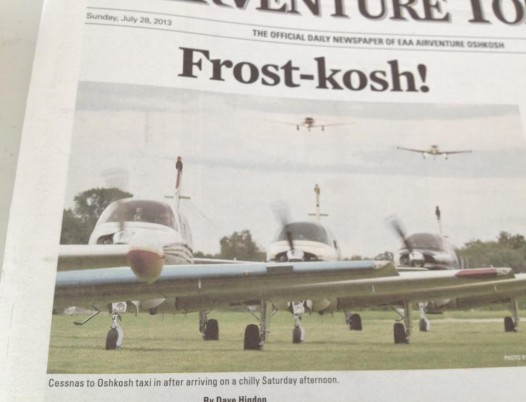 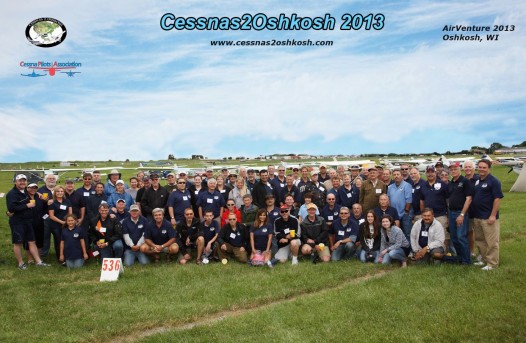 After tying down the airplane we pulled out the tent and set up camp. We had some great neighbors and shared stories every night at the campsite. The Cessna pilots consisted of everything from doctors to skydivers to airline pilots. Everyone had an interesting story to tell, and it was nice to meet other Cessna pilots from all over the country.

During the event, I was able to see some very interesting airplanes and technology. I was surprised at how far technology has come for general aviation, both experimental and certified. Later in the week I attended a workshop where I learned to cover fabric winged airplanes and even helped cover a B-17 elevator.

Overall, it was a fun week. However, as the week neared its end, I decided I wanted to stop at a few other places on the way back to Houston. One place I had heard about was the Beaumont Hotel, a bed and breakfast in Beaumont, KS (07S). It’s a 2400ft grass field, and after landing you taxi down the town’s main road and stop at a stop sign to get to the hotel. I had to pull out the POH and make sure the airplane could get into a field of that length. We were almost at max gross weight with the camping equipment, and a glass cockpit 182 isn’t something most people would land on a short grass runway. I did the calculation and came to the conclusion that the airport was suitable for the airplane. 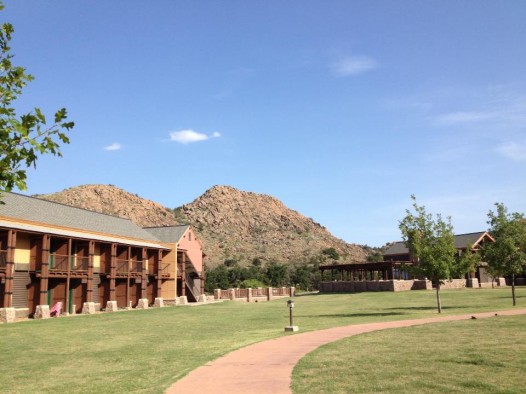 We left Oshkosh and went VFR the entire way to Kansas. I had an uneventful landing at the Beaumont hotel, and parked the airplane in the shade under a tree. The hotel and people were wonderful, and we had a great time staying there. It is a place I would definitely recommend to other pilots. They have monthly fly-ins and complimentary breakfast to pilots flying in.

After Beaumont, I decided to try a place in Oklahoma called the Atlus/Quartz Mountain Resort. When I first heard the name, I thought to myself “what mountains are there in Oklahoma?” However, upon arrival there was an array of small “mountains” around a lake. We landed at Atlus Airport (AXS) and were able to take the crew car overnight to the resort.

The next morning, we went back to the airport for a WINGS seminar and pancake breakfast. I helped John Boatright of the Lubbock FSDO set up for the seminar where he presented on the dangers flying into thunderstorms. He called the seminar “I Wouldn’t Kiss a Badger on the Lips or Fly into a Thunderstorm” and he was very animated in his presentation. It was very informative, and a good reminder of the dangers of severe weather.

After the seminar we returned to Houston uneventfully. I did not miss the humidity but it was also good to be home. I now look forward to Oshkosh 2014, which will bring about another great adventure! 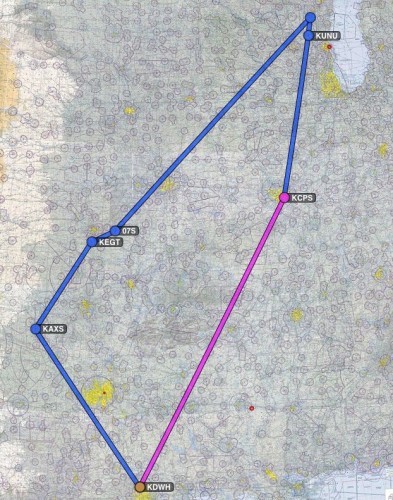