8 Things ATC Wishes Pilots Would Not Do (Or Do Differently)

8 Things ATC Wishes Pilots Would Not Do (Or Do Differently)

I have a golf buddy (let’s call him Bill) who is a retired air traffic controller. We first met when we were both participating in some future-looking air traffic simulations staged at NASA-Langley Research Center. These are regular events at Langley – they have a laboratory dedicated to testing advanced concepts in air traffic management. The simulations can put dozens of real pilots and controllers in very realistic, high-traffic scenarios and, well, to paraphrase Sheldon Cooper, “the flying may be theoretical, but the fun is real!” Although it’s not usually the intent of the tests, they create an interesting crucible in which to examine the interactions between pilots and controllers.

After a tough day of simulated flying and a formal NASA debrief, a less formal debrief often took place over beers and popcorn at the Afterburners Lounge on the base. These were opportunities to compare notes with fellow pilots and controllers about how well we handled the situations presented in the simulation. Inevitably, some real-world stories were thrown into the mix and a good-natured discussion resulted on how we can all get along better when we fly. The last time I golfed with Bill, I suggested that it might make a good article if he could help me remember some of these conversations. Here are a select few that probably hold some lessons for all pilots.

A VFR pilot requested flight following, and was given a squawk code. Bill, after a few radio exchanges, became suspicious when he kept having to repeat instructions and still was not sure the pilot had understood. “Are you a student pilot?” he asked? “Yes,” came the sheepish reply.

“Some pilots will not admit they are students until they get into an unfamiliar situation, like bad weather or navigation problems. If they advise us that they are students, ATC will handle them differently by slowing the speech rate, or giving less complex instructions,” Bill says.

Rather than pick on student pilots, the real point here is to do what you can to keep controllers from repeating themselves – you can practically HEAR their shoulders sag. (Imagine a waiter having to repeat the list of salad dressings to everyone at a table.) We all want to sound like the pros, catching every clearance and answering in precisely clipped phrases. Short of flying with a co-pilot to deal with ATC, how do we do it?

It takes practice, and learning some tricks. In IFR flying, it’s more important to understand the instructions than to write them down, but if you have time, it’s not a bad idea (even if you only make a partial copy.) I like to use my panel as a notepad. Vectors go right into the heading bug; altitude clearances go into the bug on my spare HSI (heading 030 for 3000 feet, 100 for 10,000 feet, etc.) Frequency changes go right into any available standby.

Notes also come in handy if there is a significant time lapse between the instruction and when you use it, like for missed approaches, or exiting a holding pattern. And if you ever lost your radios, you’d probably be very happy to have the last clearance you received jotted down to help you execute the lost comm procedure. 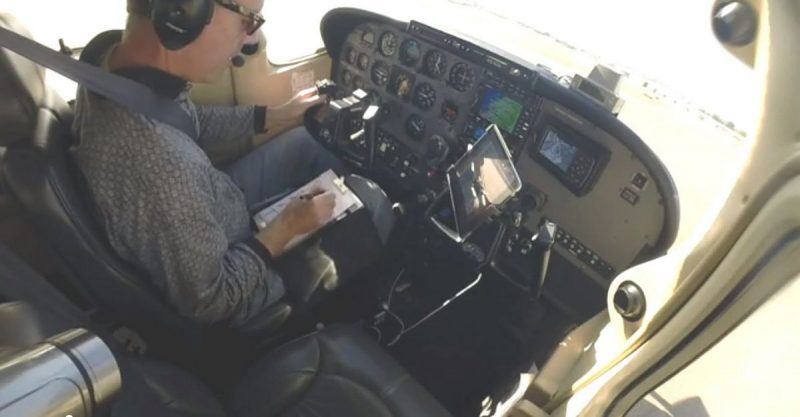 Before we leave the topic of frequency stewardship, my friend has another pet peeve – VFR pilots who don’t give more than their call sign on initial contact. This leads to additional questions that take time and congest a frequency.

According to Bill, “VFR aircraft requesting advisories should check on with their call sign, position, destination and altitude at a minimum. Most ATC facilities can make a quick keyboard entry as the pilot talks. The entry puts the aircraft into the host computer, which generates a discrete beacon code and facilitates inter-facility handoffs.”

If you are an IFR aircraft whose destination is a non-towered airport, PLEASE don’t forget to close out your IFR flight plan. The controller gave you instructions how to do it before your frequency change to the CTAF was approved.

“This leads to airspace and airport blockage for at least an hour, or until the pilot remembers to call. On occasion, police departments are called to go check airport ramps for the missing aircraft,” Bill says.

4. My scope is bigger than yours

If you are receiving services from a controller but don’t readily accept routing around weather or wait until the last minute to request vectors, you are hurting, not helping. Why? Controllers are looking at a bigger picture than what is available in the aircraft cockpit. This is true, even if you have radar, NEXRAD, TCAS, ADS-B or a combination of them. Controllers’ primary responsibility is to keep aircraft separated. They can often also see the weather, but keeping you clear of it is secondary. The sooner they can factor weather deviations into their plan, the less coordination is required. “Larger, faster IFR aircraft who wait before requesting or accepting vectors around weather make more work for ATC, especially if the vector requires adjacent sector coordination. VFR aircraft, especially smaller ones, need a wider berth due to speed limitations, and that takes time to coordinate as well,” explains Bill.

When ATC points out conflicting traffic, don’t try to sell your TCAS display as equivalent to a visual sighting – the controller won’t buy it. (By the way, saying “Got ‘em on the fish-finder” is particularly cringe-worthy.) You need to confirm the traffic visually before you stop getting traffic warnings.

There are some technical reasons why the TCAS traffic representation is not as good as the radar picture the controller sees. Radar is refreshed on a regular basis, and the measurements are taken from a fixed platform. TCAS uses transponder returns that are more sporadic, and the measurement platform is flying, not fixed, so calculations based on the aircraft’s motion are factored in. Don’t get me wrong: TCAS makes us safer, which is why it is required equipment on commercial aircraft. Just keep it to yourself, peel your eyeballs and either report, “Traffic in sight,” or “Negative contact.”

A brief aside, since I am privy to the research conducted that would allow large drones (or UAS) to share the national airspace with manned aircraft. UAS pilots fly their aircraft from the ground, often nowhere near where the UAS really are. On-board radios allow them to talk with local controllers, and they receive traffic alerts like any other aircraft. UAS will use sensors (TCAS will be one of them) to detect traffic and perform avoidance maneuvers. How will UAS pilots respond to controller’s traffic alerts? “Traffic detected” is the current favorite, since “in sight” is not appropriate.

Do you remember VOR navigation? Sure you do! Do you remember how to intercept a radial and fly a course to or from a VOR? Yes – so far so good. Now, do you know how to program your expensive, touch-screen, Bluetooth-enabled, WAAS-capable GPS navigator to do the same thing? (Pause…I’ll wait while you find the manual.)

“Today’s pilots don’t know how to enter airways or radials into their avionics anymore. If you can’t clear them point to point, they’re lost. Especially bad on weekends and holidays, with part-time fliers for airlines,” says Fred (a controller friend of Bill’s.) Well, at least it’s nice to know that GA pilots aren’t the only ones out there putting a burr in ATC’s saddle.

Even though VORs are going the way of the dodo, ATC still expects pilots to be able to fly standard procedures (like arrivals and departures) and holding patterns that are based on VOR radial navigation (or a GPS overlay of the same.) In adverse weather, you may get a holding fix on a VOR radial in a clear spot that the controller just made up. So, crack a book, and familiarize yourself with how to do more than just go point to point with your navigator.

Ouch, this one hurts because I’m guilty! I thought that, if used judiciously, the double-click was efficient, like when acknowledging a wind check from the tower on final. However, it’s not a great habit to get into, and controllers would rather know exactly who’s on the other end of those clicks. It doesn’t take much more time to say your call sign. Why risk the penalty box?

My friend has often claimed this exists – punitive vectoring. He never said what a pilot could do to justify such punishment – maybe any of the infractions listed above – but it might go something like this.