A Detailed Review of the New HondaJet 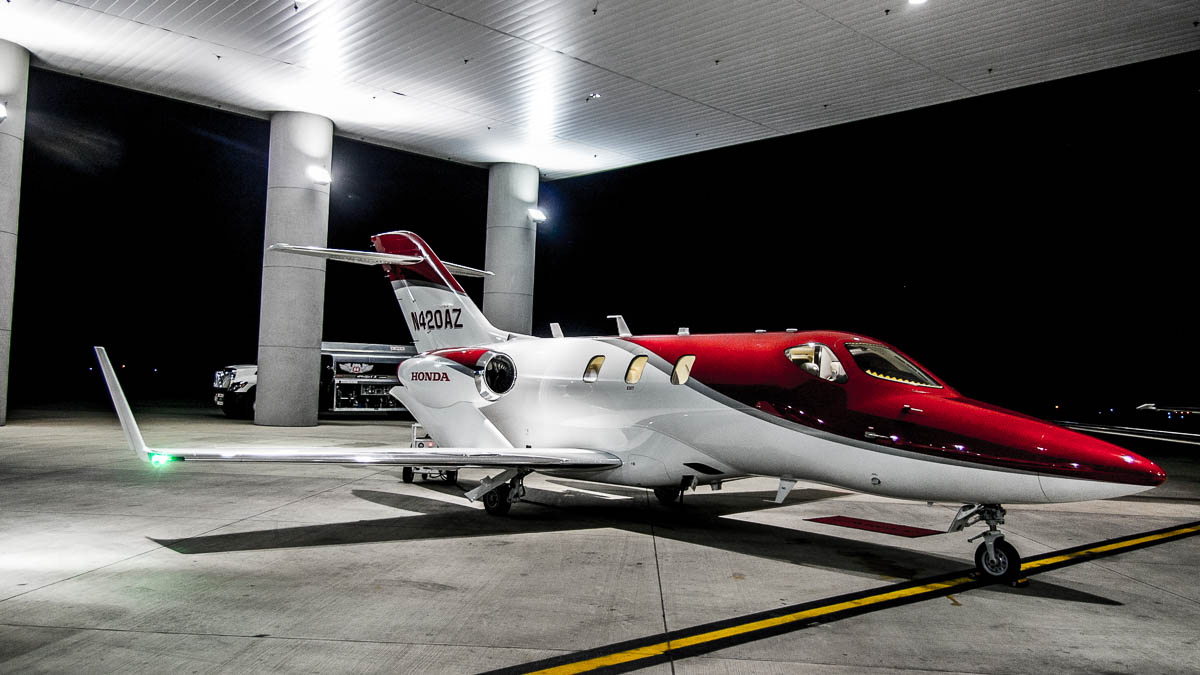 A Detailed Review of the New HondaJet

Observations From my First Ride in the New Plane

A few weeks ago, I was given the opportunity to take a ride on the brand new HondaJet, compliments of Cutter Aviation. This aircraft has been in development since before I was a pilot, so to see it come to fruition was a real treat.

I first saw the HondaJet in person at EAA AirVenture last year. Honda hosted a huge crowd and hundreds of people gathered under the Honda tent just to catch a glimpse of the revolutionary jet. With the composite fuselage and over-the-wing engine design, this sleek airplane has exceptional ramp appeal. The wings are designed with a smooth surface allowing for laminar flow over the wings, which increases the efficiency and improves the aerodynamics of the aircraft.

During the demo flight I rode in the back, only wishing this was my regular mode of transportation. While any pilot would jump at the chance to fly this plane, I enjoyed the opportunity to take it all in from the passenger’s perspective.

First, let’s look at just a few of the performance specifications achieved by the HondaJet:

The speed and altitude capability of the HondaJet outperform most of the competition, allowing you a more comfortable, fast, and efficient ride. 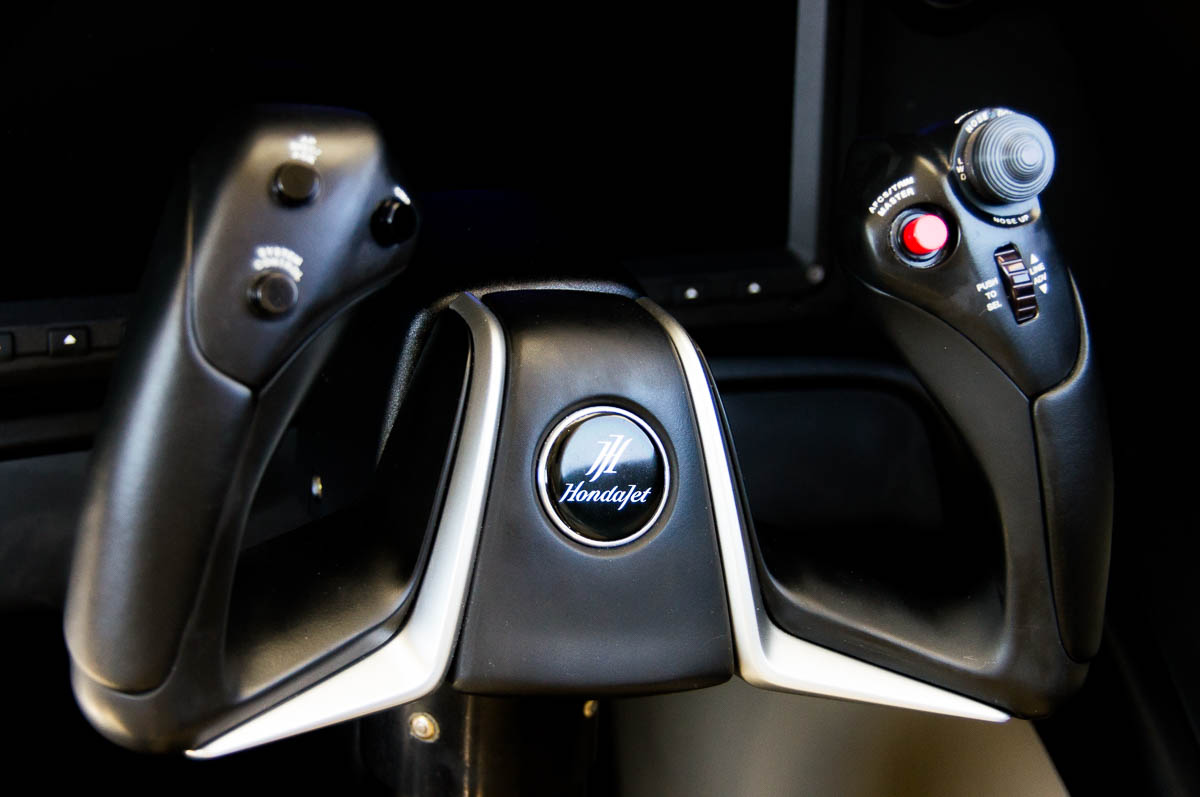 I’m accustomed to flying jets that require active monitoring of the start sequence: Checking the N2 and N1 indications, monitoring the temperatures, checking the ignition, oil pressure, and fuel flows. With the GE Honda HF120 turbo-fan engines, the startup sequence was simple and automatic… Just push a button to initiate the start sequence, then move the thrust levers to the idle position. The system monitors the starting sequence for any abnormalities. This is as simple as it gets. 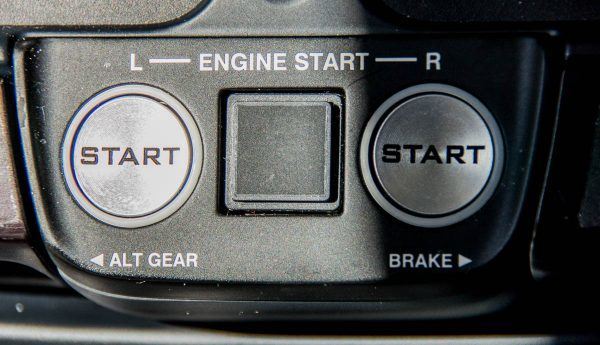 This airplane knows what you’re thinking, even before you do… For instance, even the exterior lights are automated. Release the parking brake, and the taxi light turns on. Advance the power for takeoff, and the landing lights and strobe lights come on. The recognition lights stay on anytime below 18,000 feet, and automatically turn off in the flight levels. Of course, you can also manually control the lights if needed. 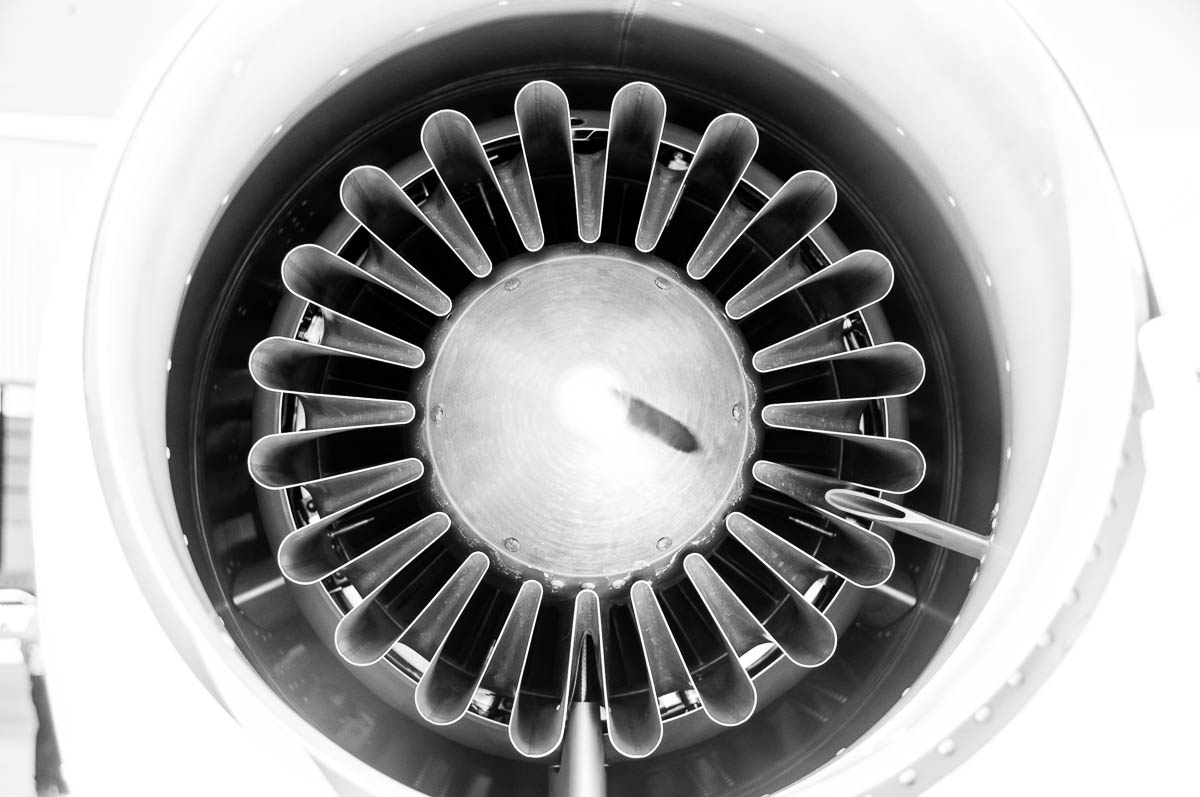 As we taxied out, the sound of the airframe was more noticeable than other jets I have flown. It was just general creaking and flexing of the airframe as we taxied over an imperfect surface. This happens on most airplanes, except usually the engine noise overpowers it to the point that we don’t notice. In the HondaJet, the engine noise was minimal, so you could hear a lot of sounds that wouldn’t normally be audible. The jet is quiet enough that I could hear the pilots talking up front even though I was sitting in the rear seats.

OTWEM – Over the Wing Engine Mount

The passenger seats are well-designed for maximum comfort. The seats articulate and slide out towards the center of the aisle, which provides extra headroom and elbow room. Conveniently located next to each seat are two cupholders. The light tan leather interior was complimented by wood grain tables and overlays. In the front of the cabin are bins which allow for storage of supplies, or snacks, and they are soon expected to have ice bins available to use in the drawers as well. 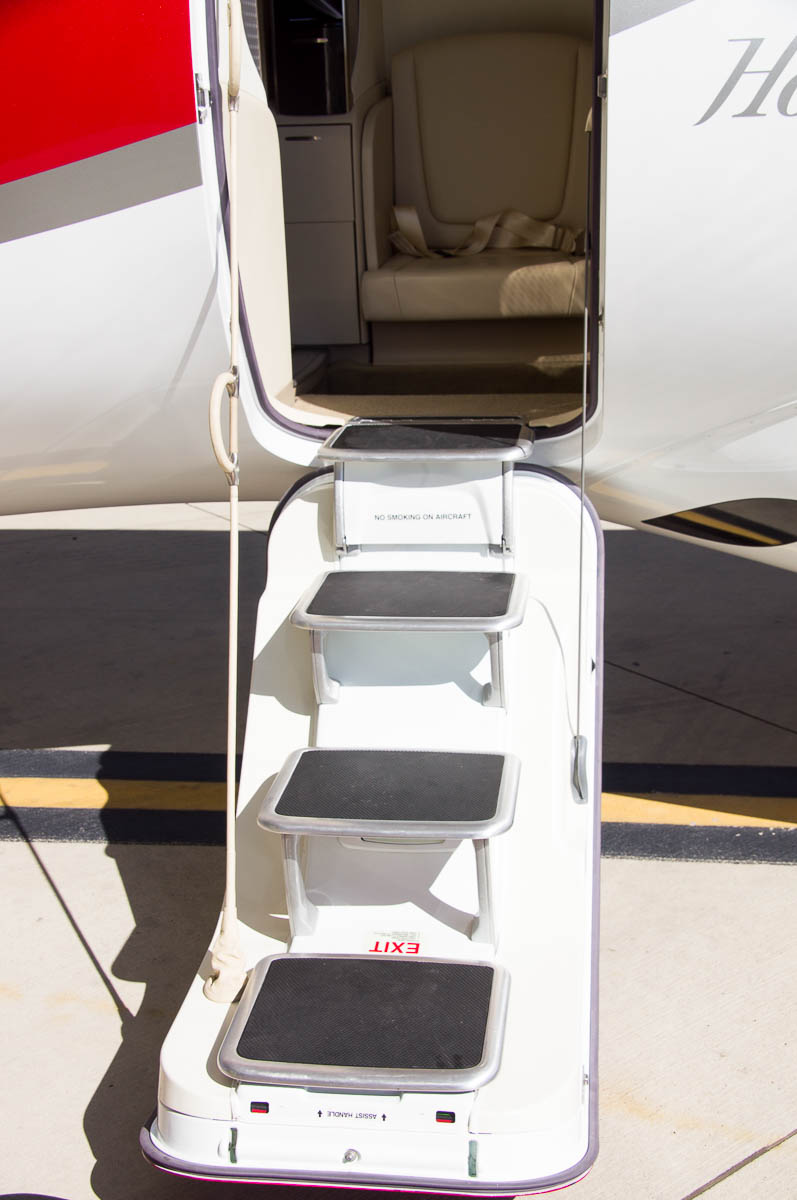 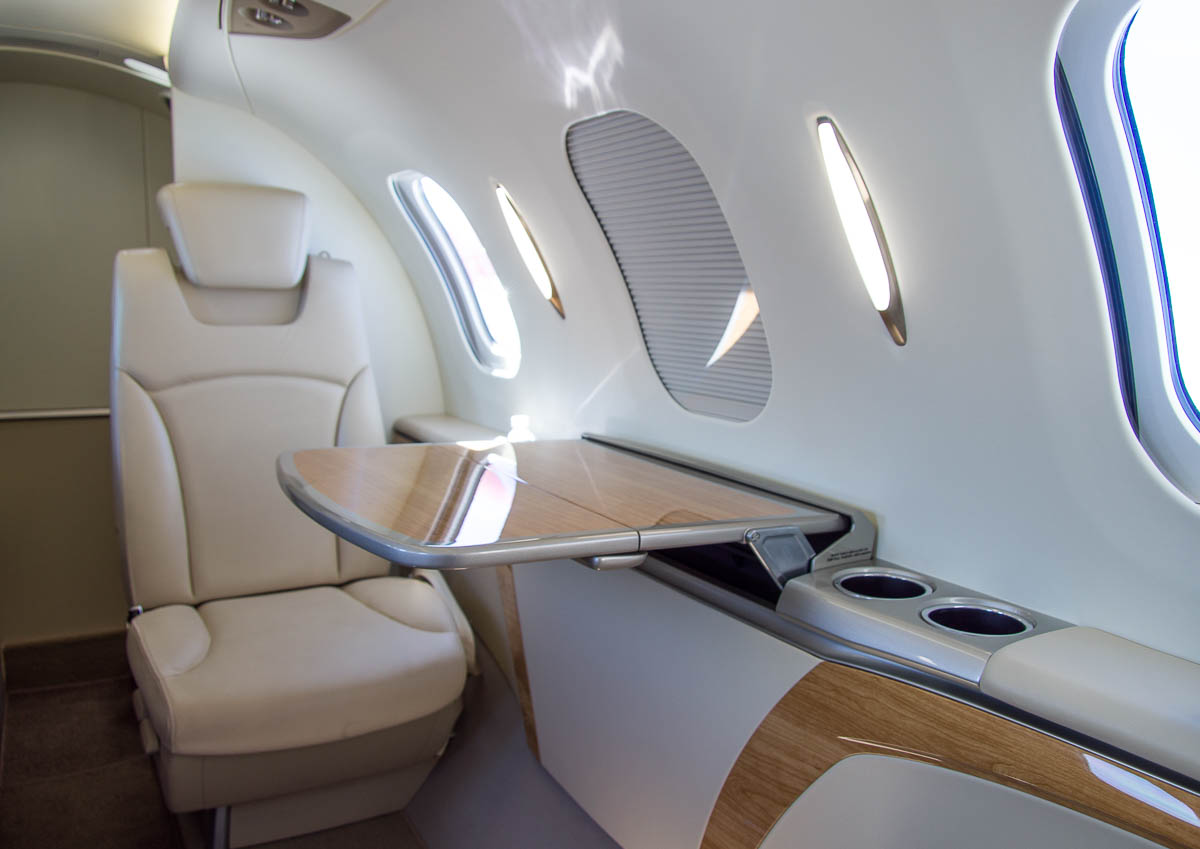 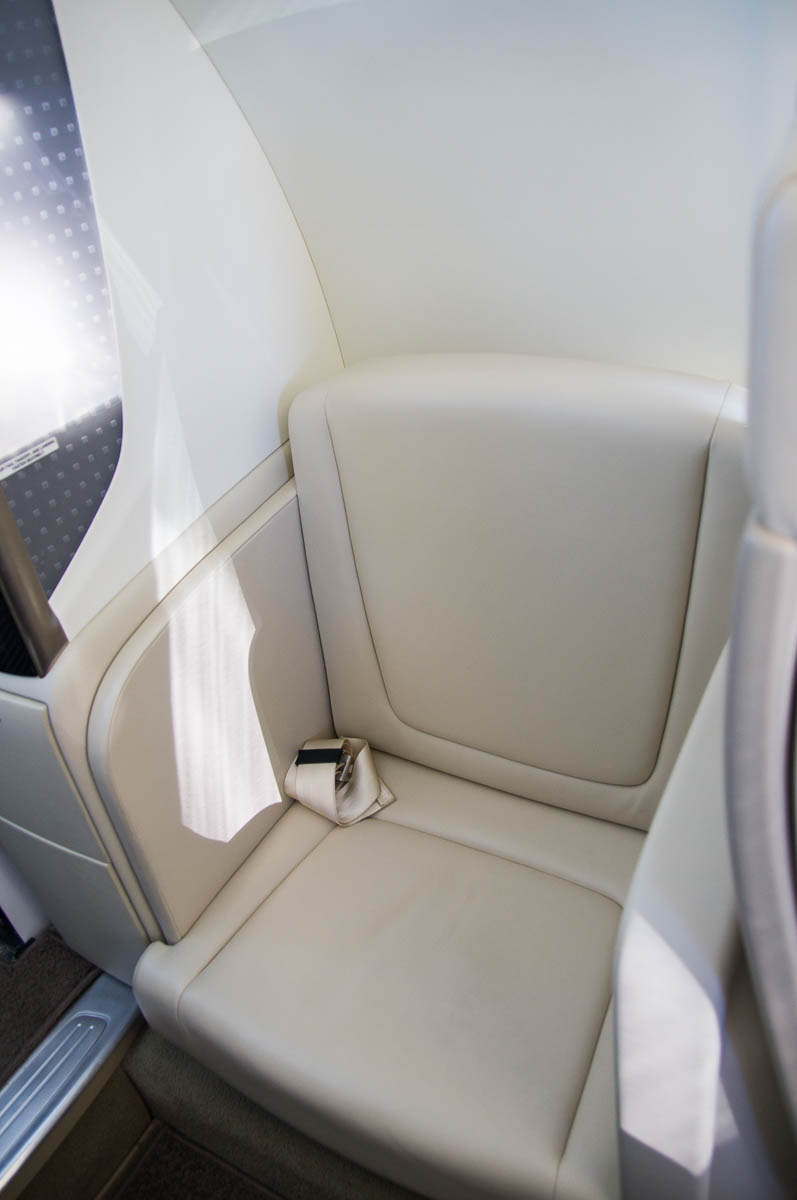 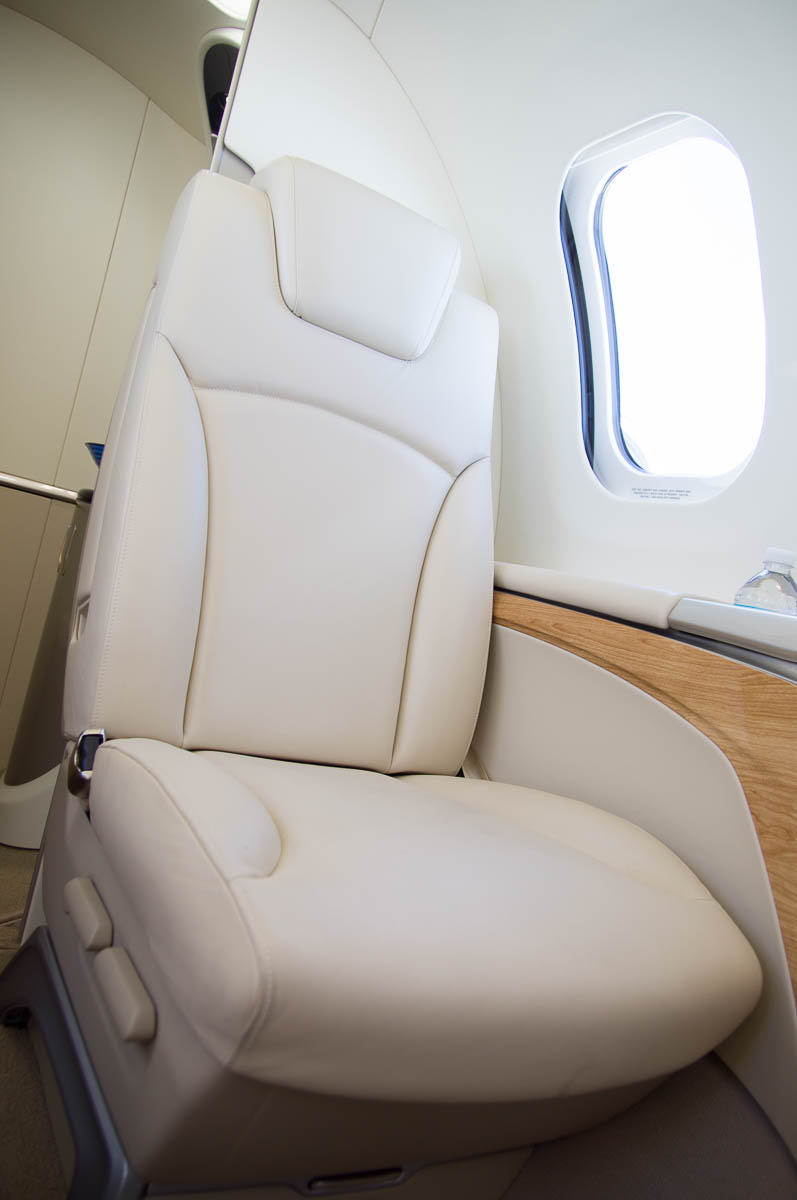 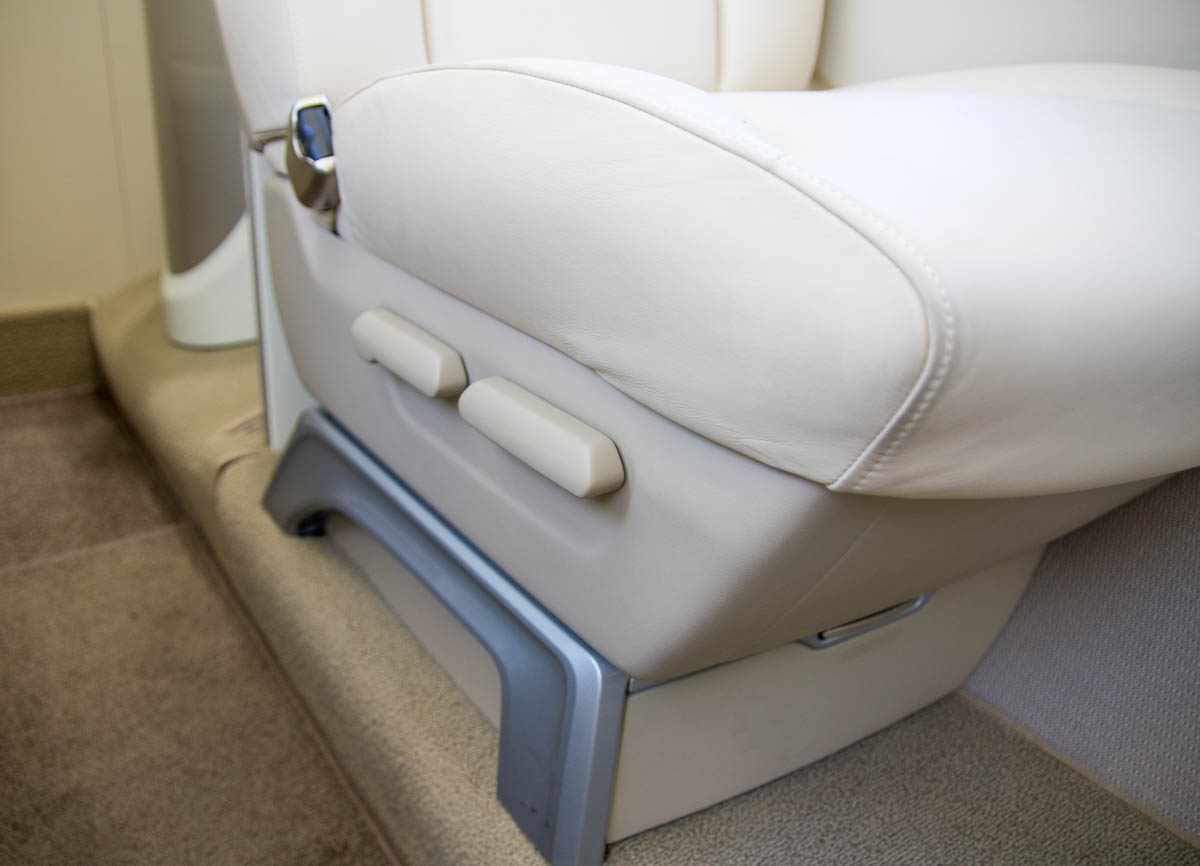 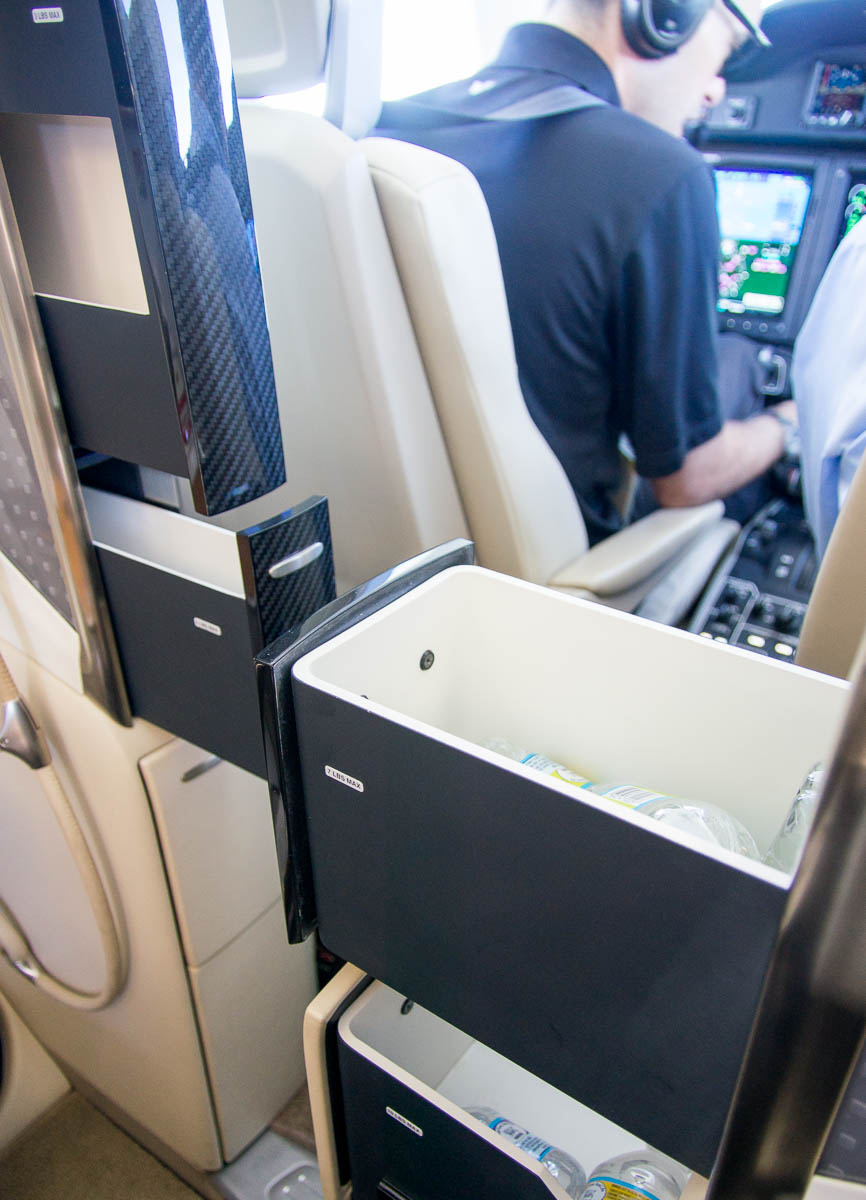 The windows have internal electrically powered blinds that lower with the simple press of a button. The interior is configured with two cockpit seats and four cabin seats with an optional fifth cabin seat which is side-facing. To get in the cockpit, there are hand holds on the ceiling to help as you position yourself in the front. The pilot seats also have several adjustments to set the seat positioning for individual comfort. 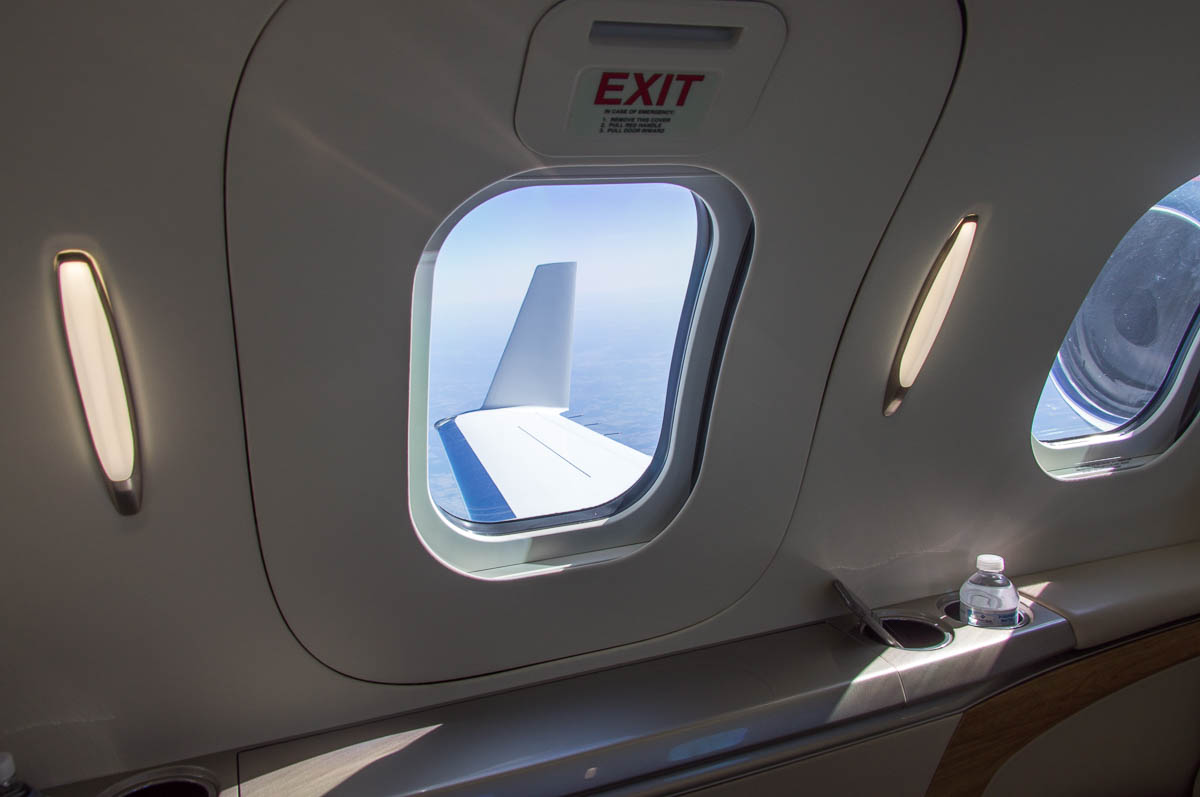 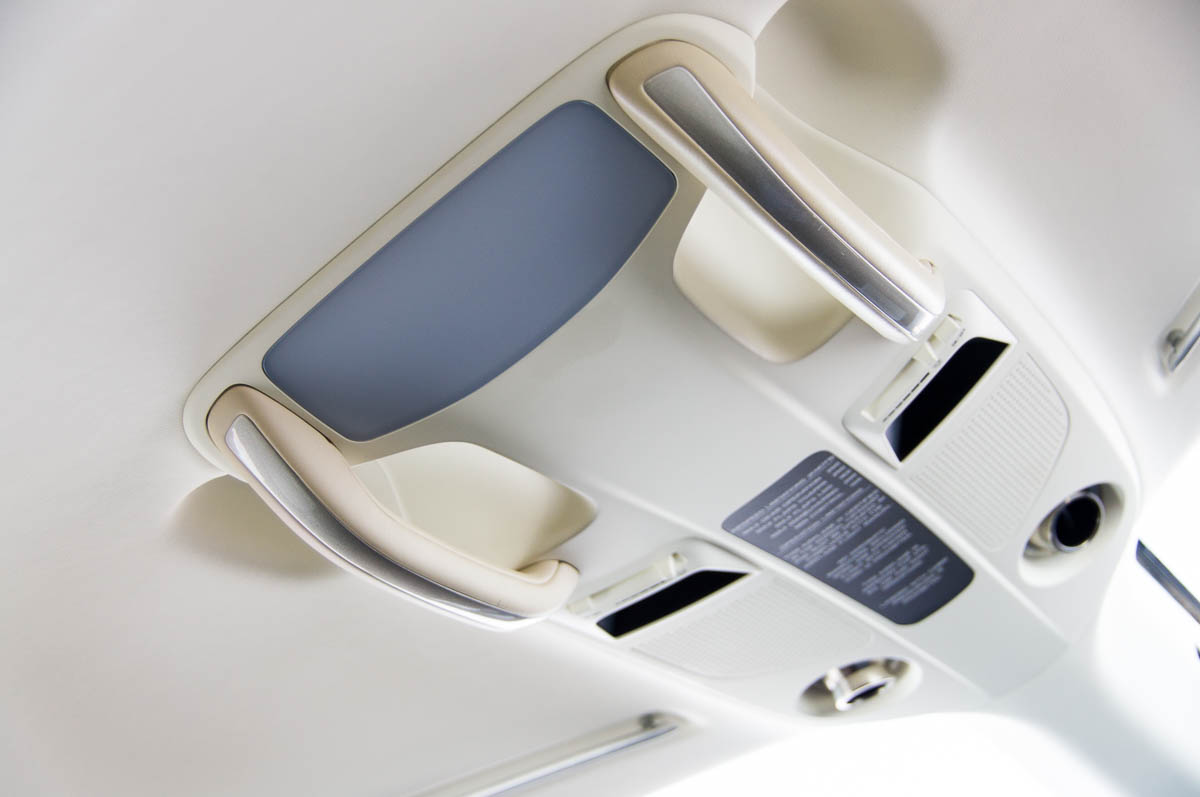 There are baggage areas in the nose and in the aft section of the airplane. In total, they amount to 66 cubic feet of room for cargo. 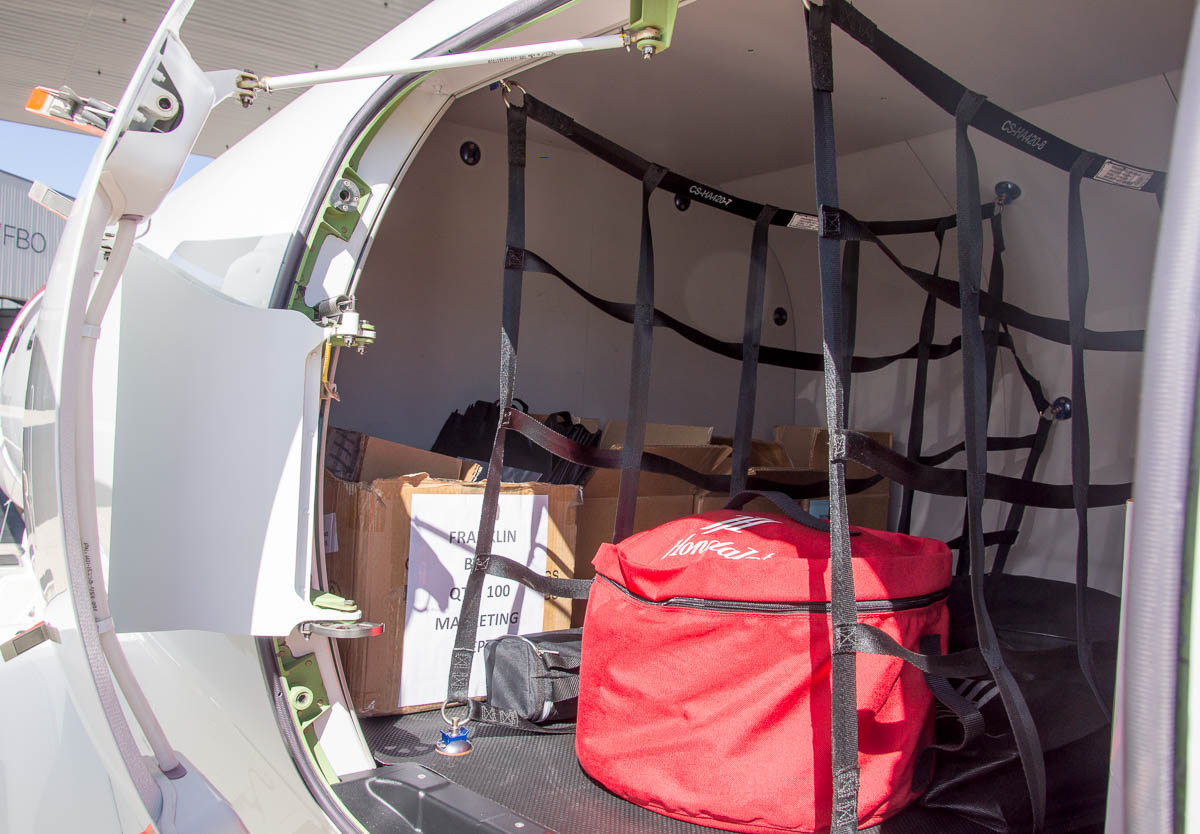 One of the many features that will help you sell the idea of this plane to your significant-other is the walk-in lavatory, which has a real door (as opposed to a curtain or no curtain at all). Even the lav incorporated thoughtful design including a skylight and an automatic sink. Impressive for a light jet.

Now for a topic that most people won’t tell you about… Most planes of this size require that you carry the lavatory waste water tank through the cabin of the airplane to empty it between flights. Not a fun activity and one that even some FBOs will decline due to concerns of accidentally spilling something on your nice interior. But unlike most airplanes of this size, the HondaJet offers an optional externally-serviceable lavatory. I would highly recommend getting this option so that the less-glamorous duties become a little easier to manage. 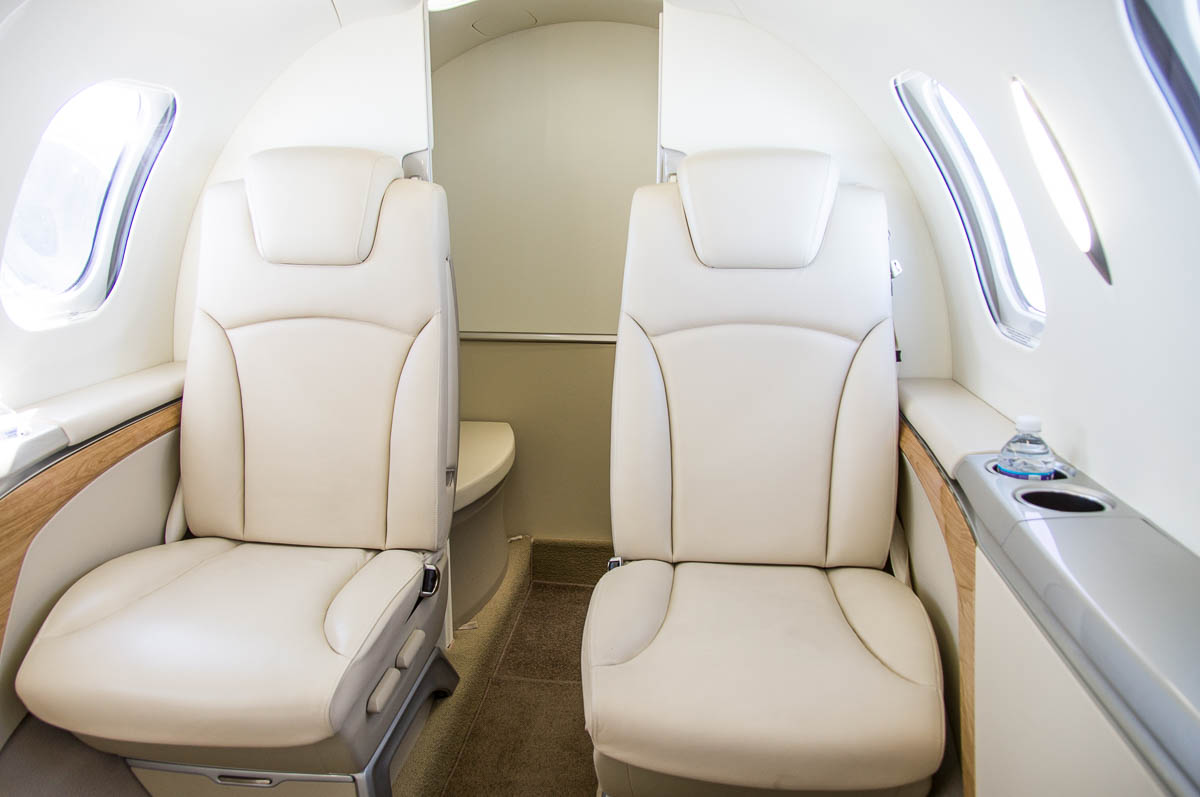 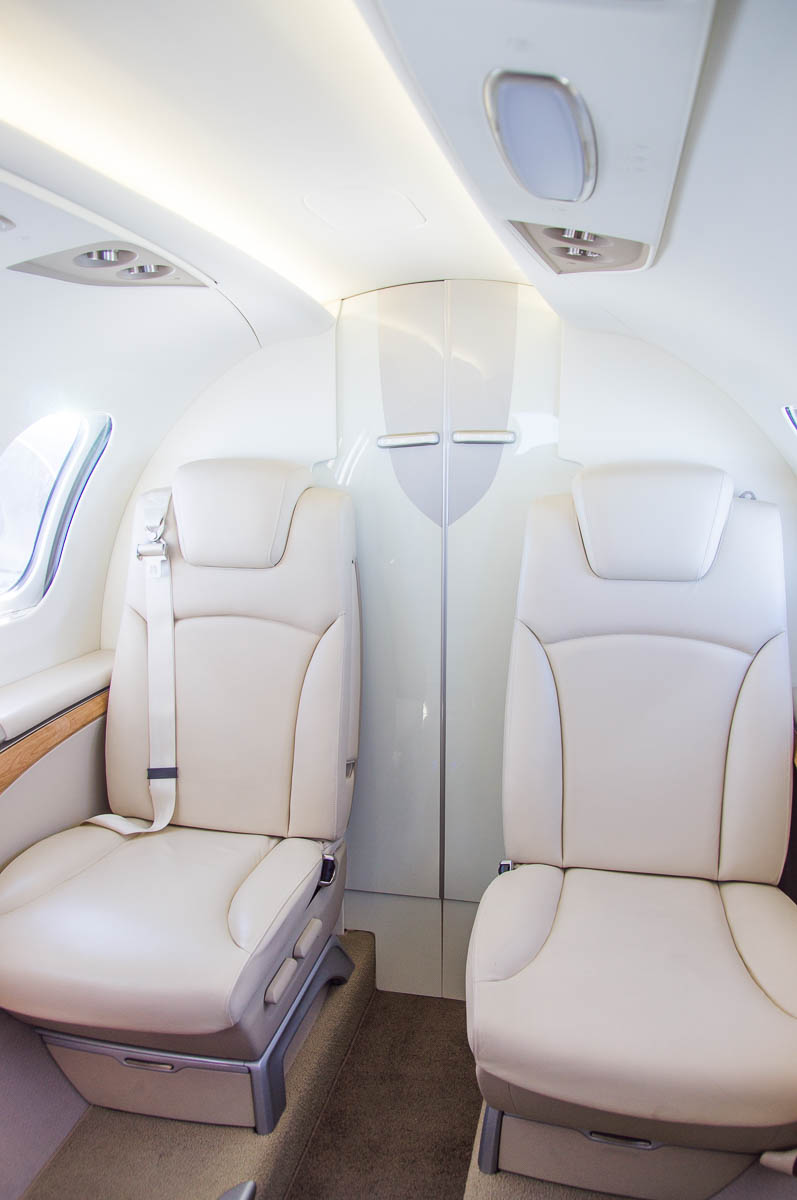 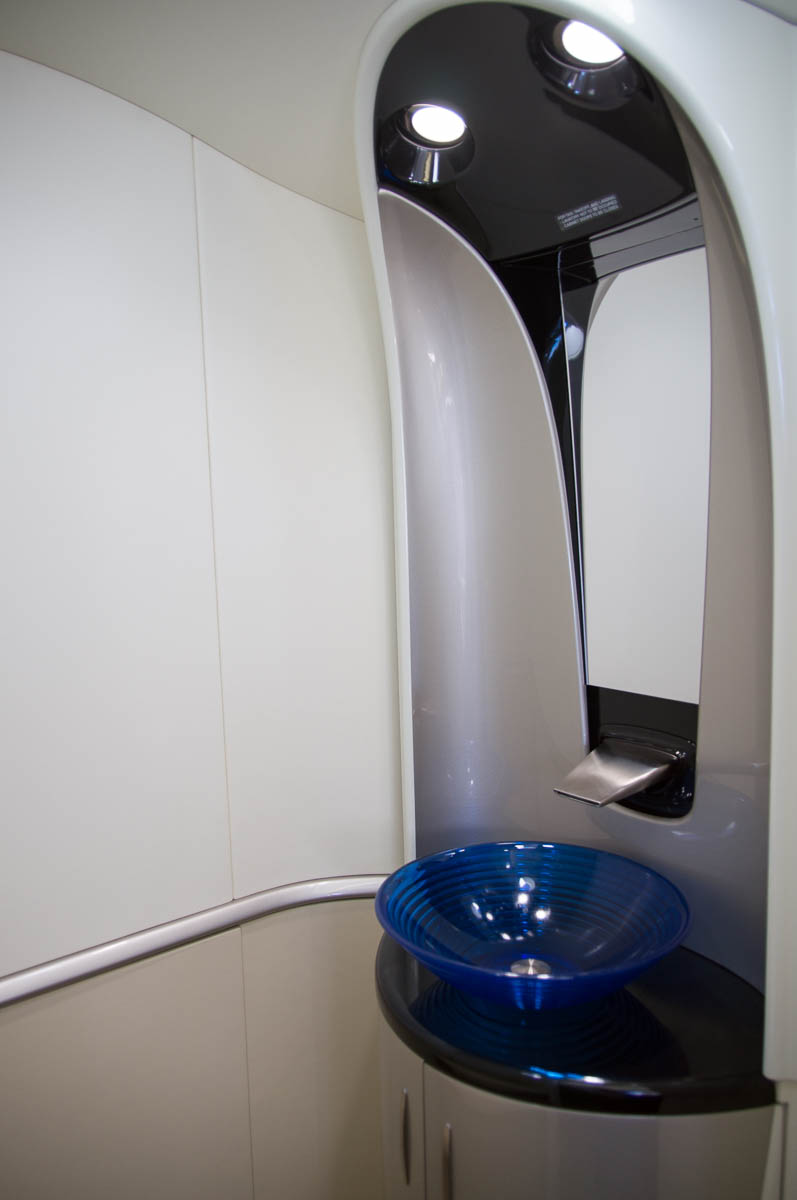 With a wingspan of only 40 feet, the HondaJet is easily maneuverable on the ground even at small airports with tight taxiways. The wingspan is only a few more feet than the wingspan of the Cirrus SR22 or Cessna TTx. After the pilots worked through apparently simple checklists, we were taking off from Conroe North-Houston Regional Airport and on our way to a great flight.

The HondaJet’s Garmin G3000 is an incredible system and the integration was a success. The angle of the GTCs (Garmin Touchscreen Controllers) was ideal to minimize heads-down activity (as opposed to being mounted flat as in a few other aircraft configurations). The performance was good and the prospective owner seemed at ease with controlling the airplane. While I didn’t get to note all the real world performance specs, I hope to do a more thorough evaluation from the pilot seat next time. 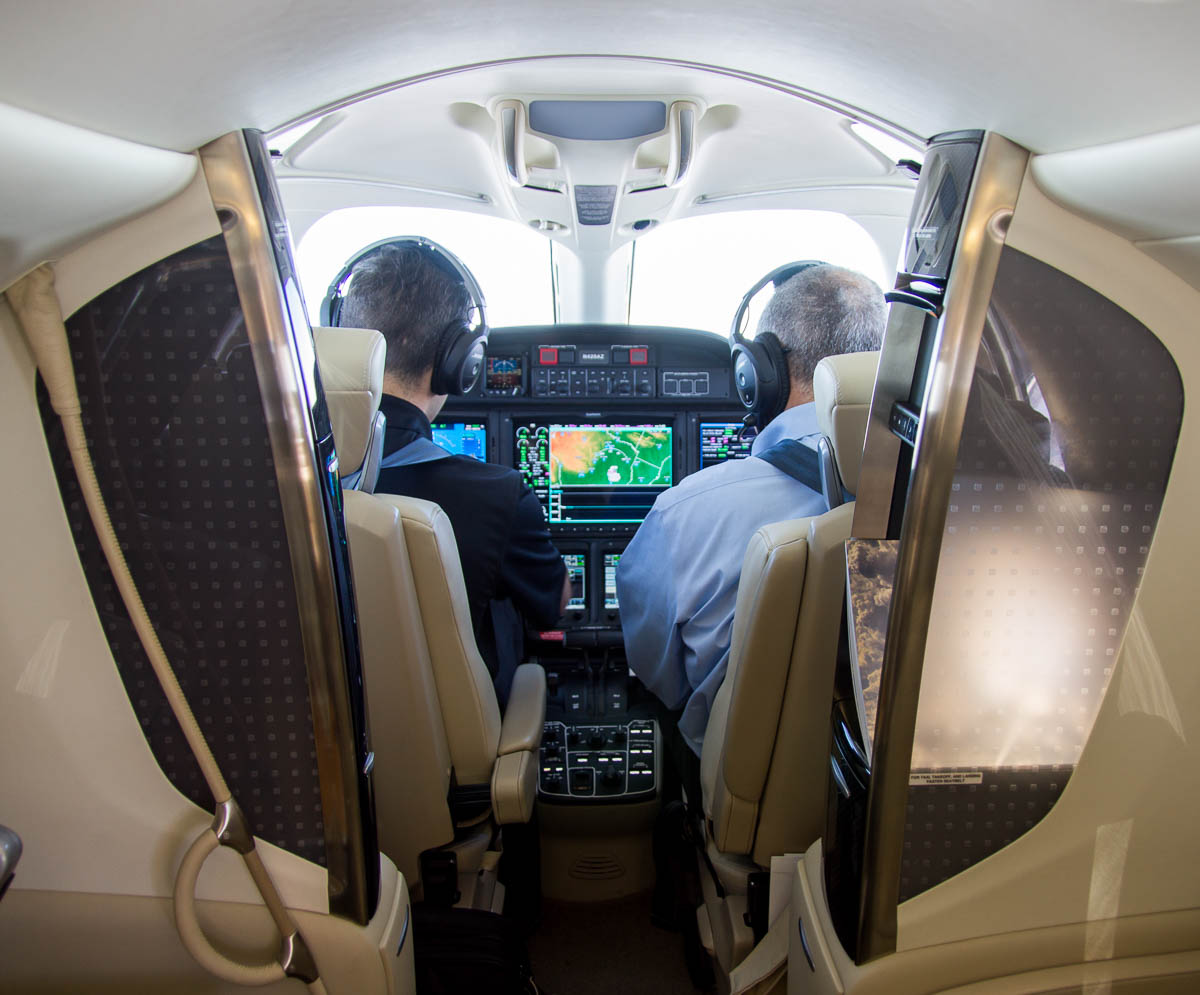 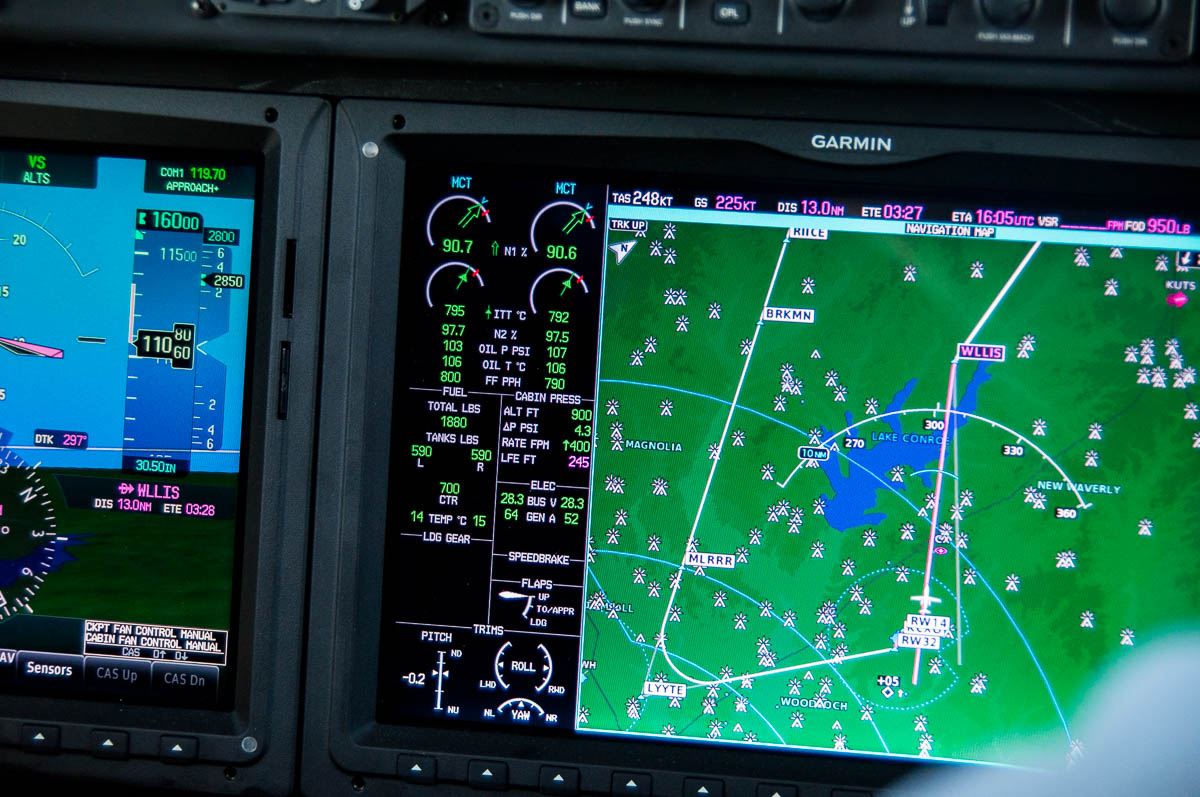 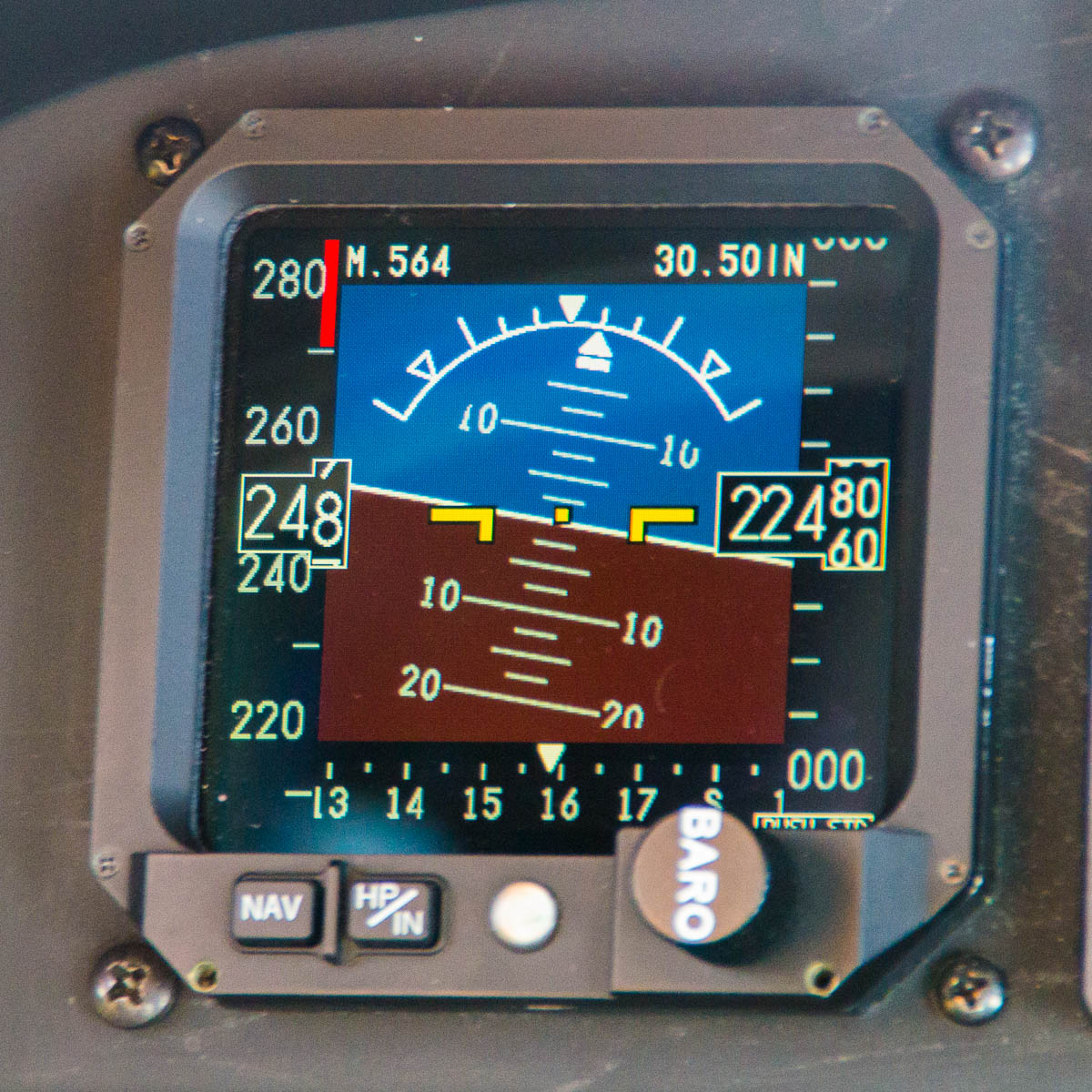 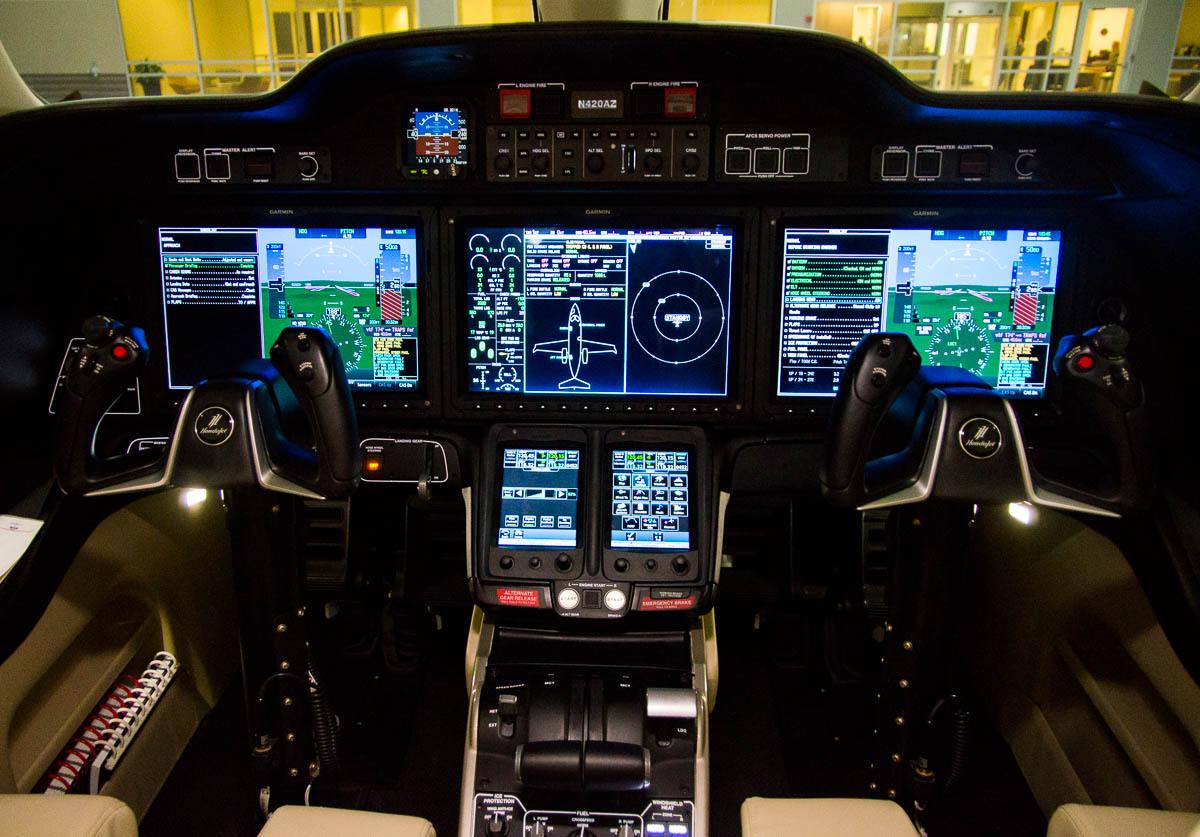 This is a new button on the Garmin autopilot that I had not seen before. It does exactly what it sounds like… It’s cruise control for the cruise phase of flight. Apparently, it holds a selected speed while in the ALT (altitude hold) mode within 5% of the selected N1 setting. It’s not a complete auto-thrust system, but it should help eliminate repetitive manual thrust adjustments in cruise. 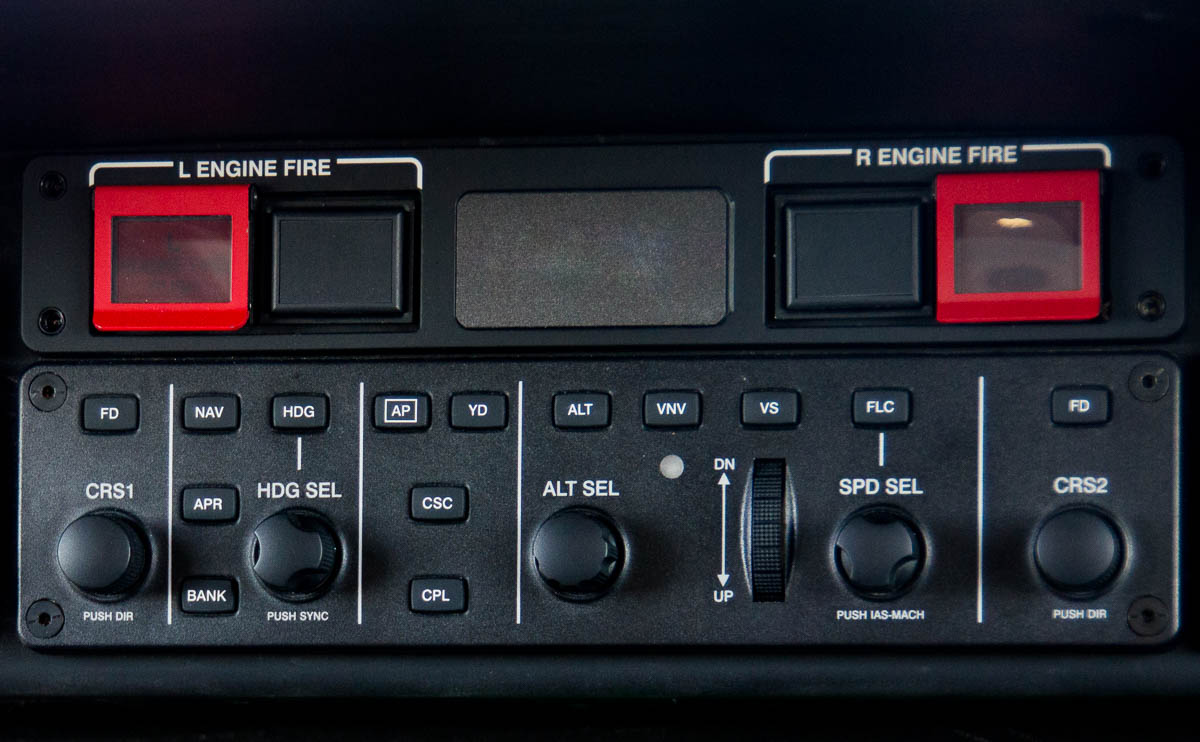 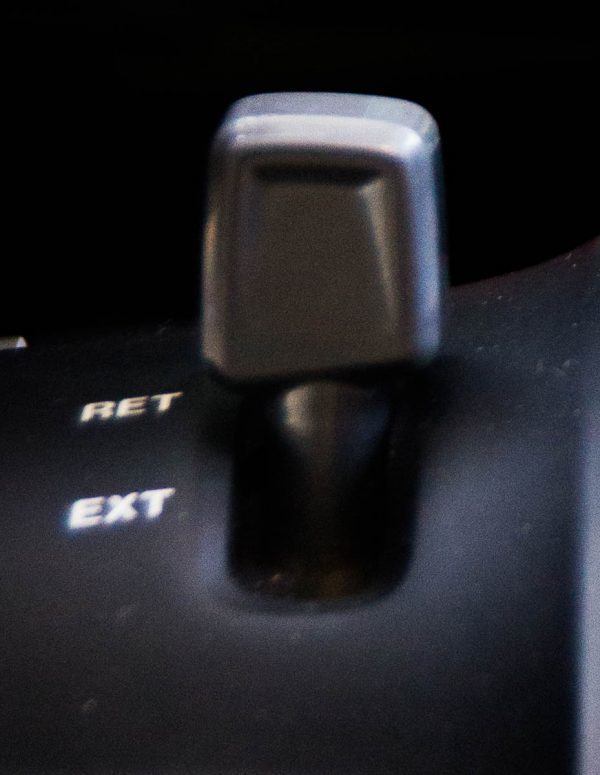 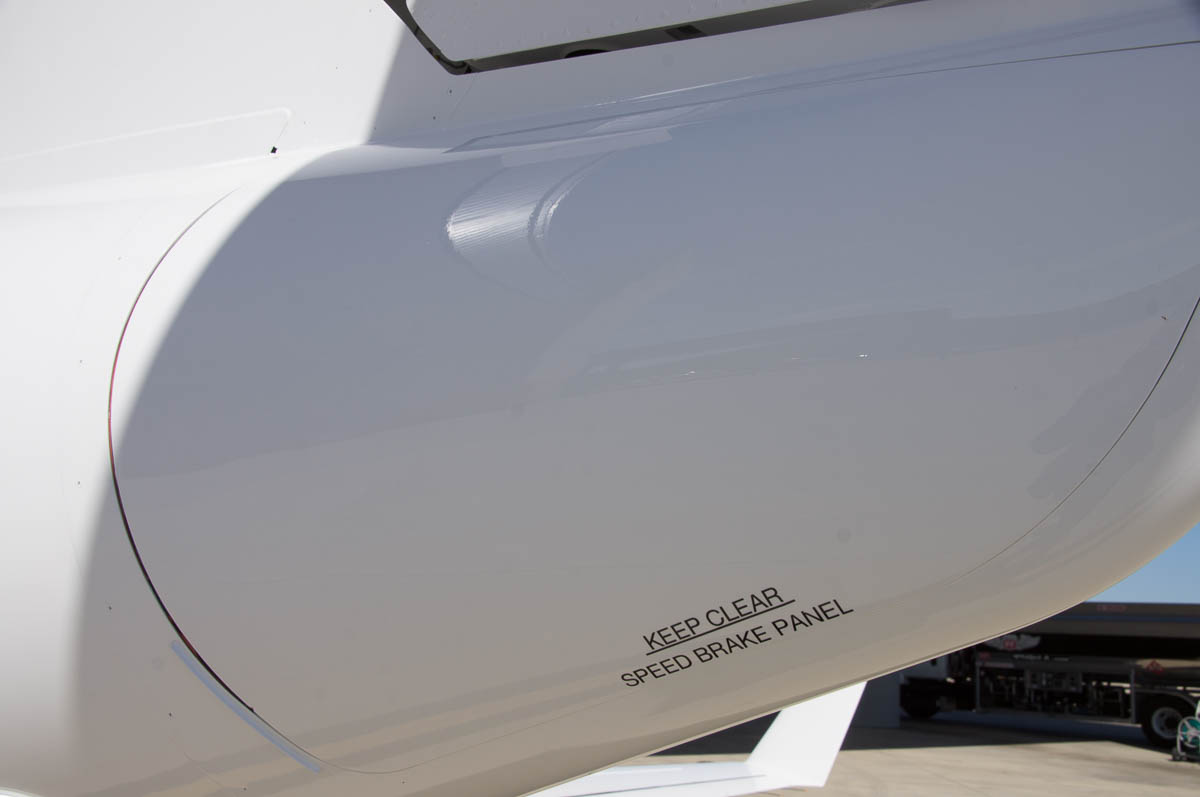 The wings are heated with bleed air from the engines, the windshields are electronically heated. The de-ice system for the tail is something I found quite interesting. The system uses electrical pulses to basically “thump” the ice off the tail. It’s like having inflatable boots, without the boots. They call it EMEDS: electro-mechanical explosion deice system. The system provides benefits over traditional methods such as pneumatic boots or TKS systems.

EMEDS – How does it work? 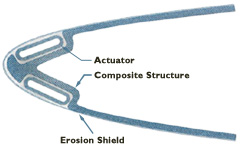 According to the manufacturer, Cox and Company, “A microsecond duration high current electrical pulse delivered to the actuators in carefully controlled timed sequences generates opposing electro-magnetic fields that cause the actuators to change shape rapidly. This change of the actuator shape is transmitted to the erosion shield of the LEA causing it to flex and vibrate at very high frequencies. This rapid motion results in acceleration-based debonding of accumulated ice on the erosion shield.”

Check out these videos to see the technology in action.

The speeds for the HondaJet are simple to remember. 200 KIAS max gear speed and Approach flap setting. 160 KIAS max speed for Landing flaps. While you are on final approach to landing, the yaw damper remains on to keep the approach smooth, and then it automatically disconnects at 50 feet to give the pilot full control of the rudder. The “green dot” shown on the primary flight display allows the pilot to view the airplane’s best AOA (angle of attack) speed, or L/D (lift/drag) max.

The approach to landing felt stable and the approach speeds would be a comfortable transition for most pilots who fly fast single-engines like the Cirrus, TTx, or Meridian. The trailing link gear allows for smooth landings and helps keep pilot egos fully intact. 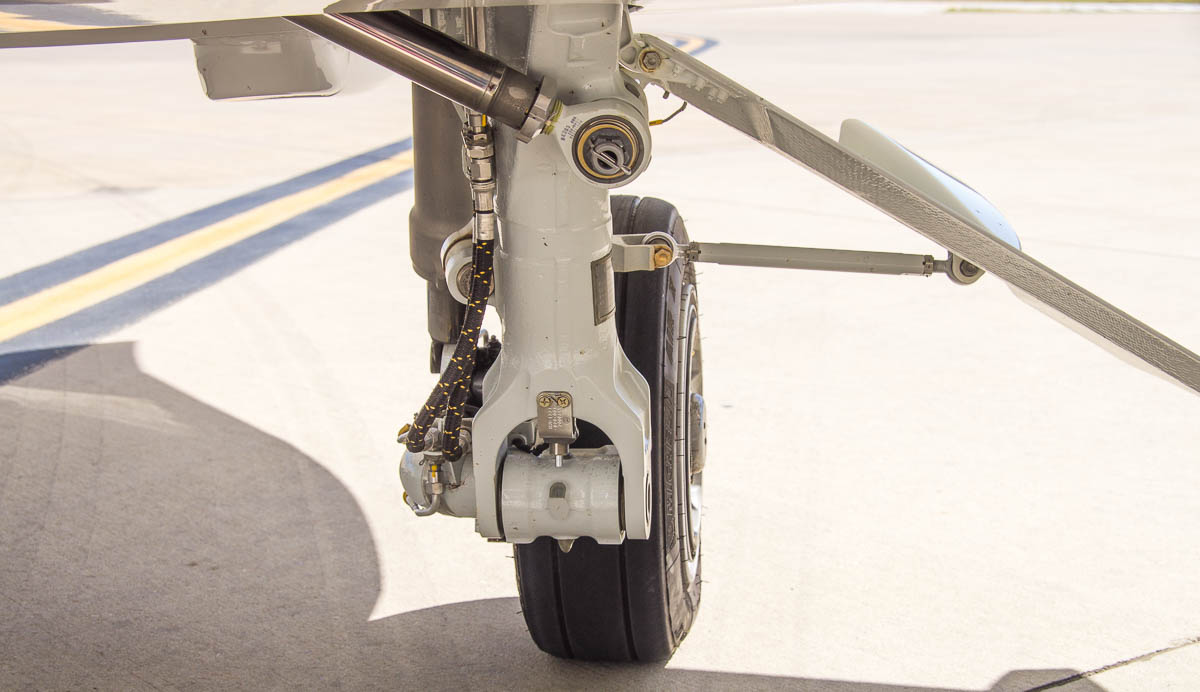 One of my concerns with any new airplane manufacturer would be company viability and customer support. With Honda at the helm, the company viability is certainly not as much of a concern as it would be with a start-up aviation enterprise. Even still, I pressed to find out what preparations were being made by Honda to keep customers flying after the sale. Here are some of the highlights of what I learned:

Although the maintenance programs would likely raise your immediate operating cost per hour, they provide predictability over the ownership of the aircraft. Without these programs, your early operating costs may be low, but you would be taking a gamble hoping that no surprises occur during the span of your ownership. Many owners prefer the ability to set a predictable, level budget with the consideration of maintenance costs built into their hourly calculations. If you elect to decline these programs, then consider setting aside an equivalent amount of funds for maintenance reserves.

While I am usually skeptical of the support system of a newcomer to the aviation industry, I feel a sense of confidence in HondaJet’s ability to support their customers even while the fleet is in its early growth phases.

If you’re looking for a light jet with the latest technological innovations, the HondaJet might be the one for you. The luxury of this beautiful plane combined with stunning performance will make the HondaJet an attractive choice for many buyers.

Special thanks to John Delawyer with Cutter Aviation for inviting me along for the ride. 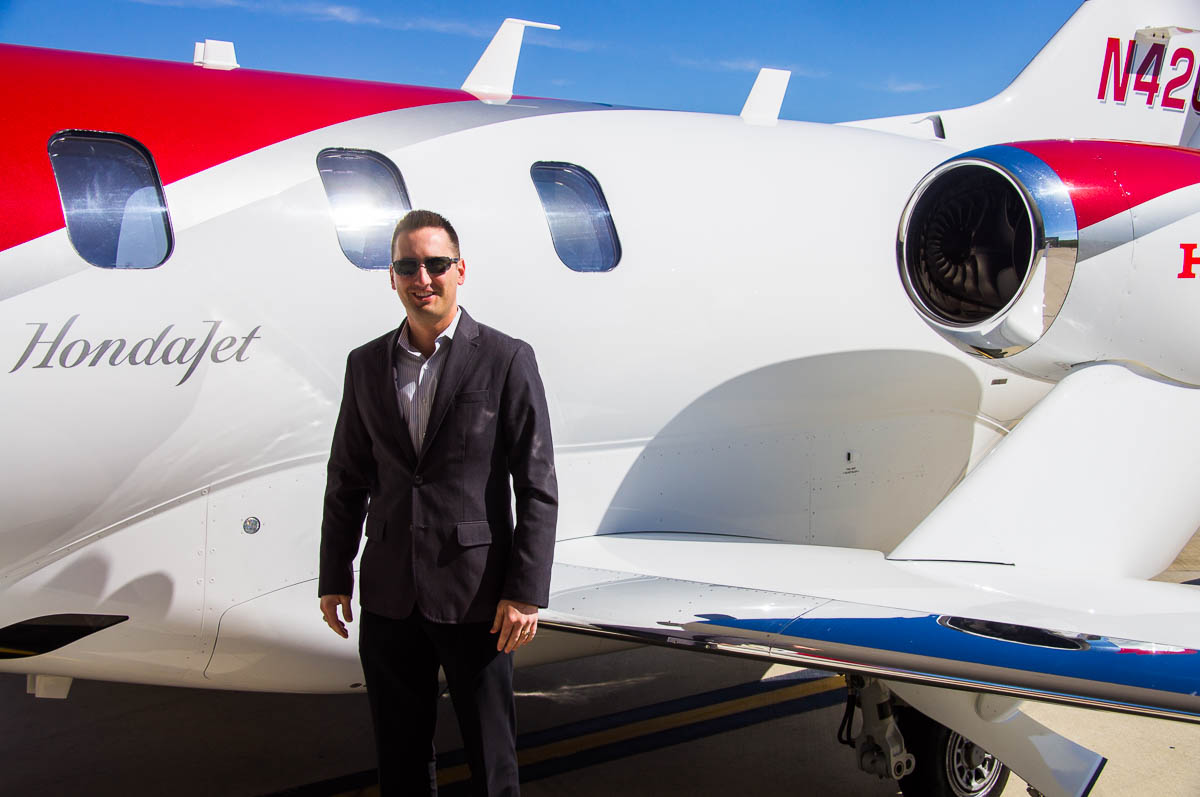 We have affiliations with multiple aircraft manufacturers and aircraft dealers, which may allow us to earn a commission or referral fee. Since we are not exclusive to one particular manufacturer, we are able to bring you unbiased information to make an informed decision rather than one-sided reviews. If this information has helped influence your decision, please consider using us as the referral source for your purchase. If you’re a serious buyer for a new aircraft, call me directly and I’ll help coordinate demo flights for you and assist with the purchase process. – Brandon Ray (866) 227-8149.

We try to keep our facts straight, but errors may occur. Please do not use our generic performance numbers or specifications presented for any actual flight planning. You should rely on the manufacturer’s approved documentation when making flying or purchasing decisions based on specific numbers or features.

I invite constructive input if I missed something that should be included here. Send me your comments.