A Pilot’s Perspective on the New Airplane

Just recently I was given the opportunity to take a demo flight in Diamond’s new twin engine DA62 aircraft, and the one word that keeps going through my mind is ‘simple’. As you will read in more detail in the following review, the aircraft was very simple to fly. So much so, that at times I was wondering what I had forgotten to do, such as setting the fuel mixture or propeller control. But these are items that could be disappearing from checklists for new aircraft, especially if Diamond has any say in the matter. For this review, I’m going to focus on the experience of flying the DA62 rather than the specs of the aircraft as you can find them on Diamond’s website through the following link: http://www.diamond-air.at/twin-engine-aircraft/da62.html.

Before we get started, let me talk a little about my multi-engine time. I’ve flown a few hours in a Beech Duchess and a Piper Seminole, but the majority of my twin time is in a Piper Twin Comanche. Both my multi-engine commercial and instructor ratings and all of the multi-engine students I’ve trained have been in the Twin Comanche. Now that you have an idea of the past experiences I’ll be comparing this flight to, let’s get on to the demo flight.

To start with let’s look at the trickiest part of most flights, getting into the aircraft. Diamond seems to be one step ahead of other aircraft manufacturers, in that they have included some features to help with the ingress process. First, there is a back door, which makes it much easier for the passengers to enter the middle and back seating areas. This is a nice change from my twin Comanche days of opening my door, leaning my seat forward, and doing the wing shuffle to allow the passengers in.

Moving to the next feature, for the pilot and co-pilot seats there are two hand holds to help you lower yourself into the airplane. This is similar to the DA40 design, but instead of the hand holds being molded into the dash, they are molded into the composite frame. Another improvement that helps with the ease of ingress is that the front portions of the pilot and co-pilot seats fold up. So, for those NBA stars that wear size 17 shoes and are looking for a personal light twin, this is your airplane. All kidding aside though, it is a nice feature. All of these features also make getting out of the airplane easier as well. So, after you taxi in, shut down, and egress the aircraft, you won’t destroy the Chuck Yeager persona you’re going for by stumbling and bumbling out of the airplane. While getting into the airplane takes a little more skill than getting into a car, the folks at Diamond have gone to great lengths to make the process easier. 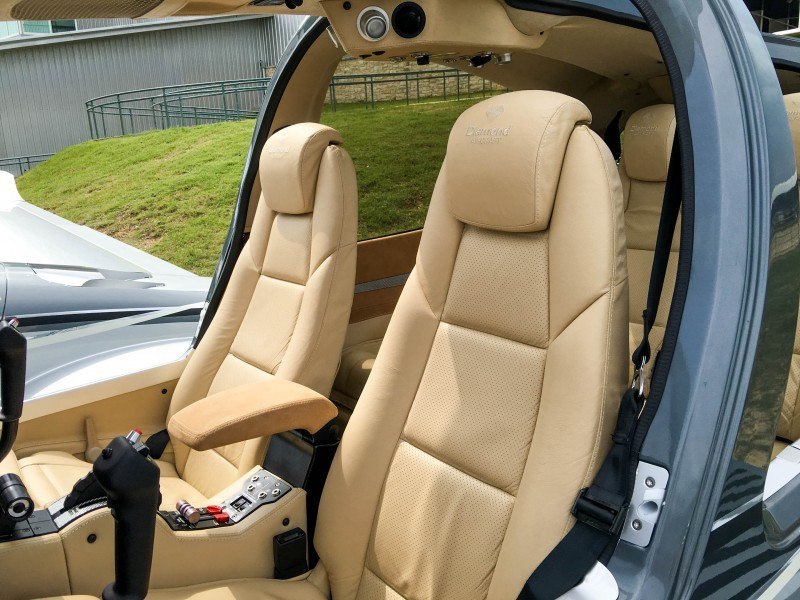 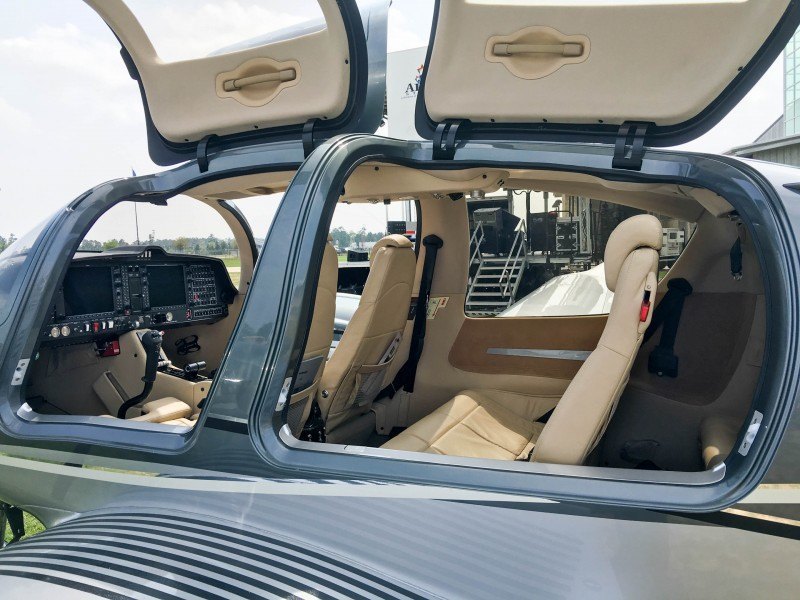 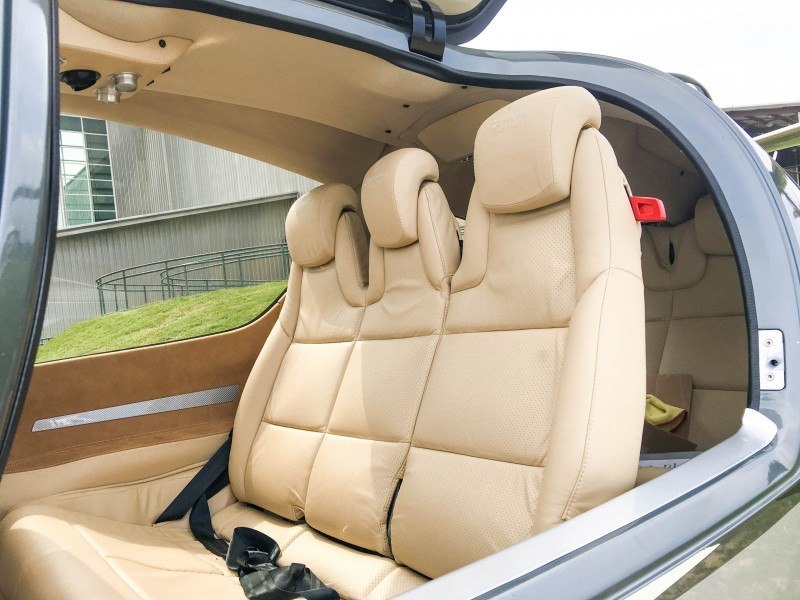 Another thing you’ll notice as you step into the aircraft is the stick, and just as with other Diamond aircraft, the stick is centered just in front of the pilot and co-pilot seats. The stick gives a more natural feel to flying, but that is a personal opinion. If you prefer a stick over a yoke, you won’t be disappointed. The stick design is simple, with the pilot having an auto pilot disconnect button, electric trim control, push to talk switch, and a control wheel steering (CWS) button. For those like me who find the electric trim on the Cessna yokes a little sticky, you can be relieved in knowing that the electric trim tabs on the stick are easier to push up and down. It did seem just a little slow in giving me the trim I was requesting, but this ended up not being a big deal as the stick forces are light in this airplane. 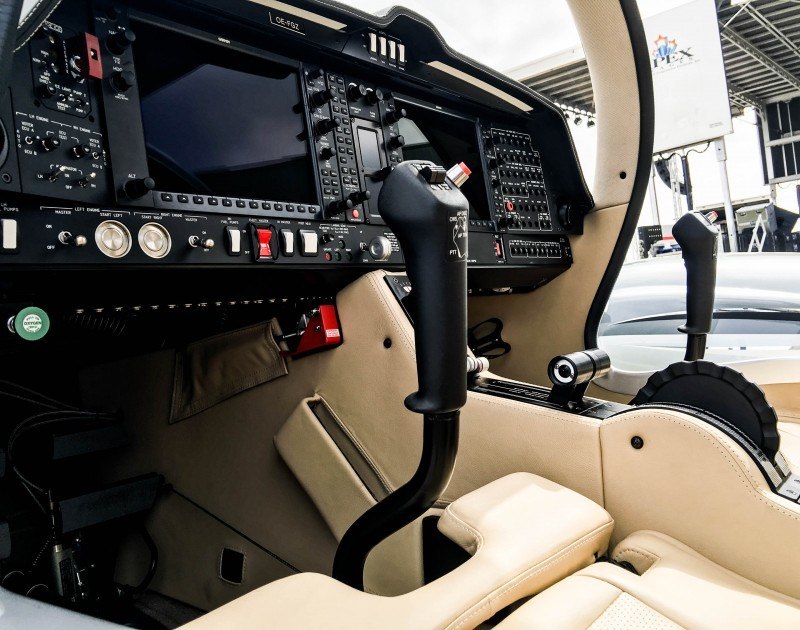 After gracefully entering the airplane and fastening the belts, it was time to fire up the engines. As I was mentally preparing for the demo pilot to open the checklist, he had me turn on the master engine switch. Then he directed me to push a button in front of me for a few seconds. Next thing I knew the engine was running. Wait, what? Yes, that was it. One switch and one push of a button and the engine was running smoothly. It was literally as easy as starting my car. Similarly, the right engine started just as easily. Now, the engines do have glow plugs in case it’s the first flight of the day and the engines are cold. So, there could potentially be a small wait time for the glow plugs to do their thing, but I was astonished with the ease of starting the engines; especially coming from a twin Comanche where each engine was different and had its own special start procedure (closing one eye, opening the throttle, leaning the mixture, and hoping beyond all belief that it’ll start when hot).

After the engines were running, the next thing I noticed made me pause; it was the demo pilot talking to me. Now it wasn’t him that was startling, it was the fact that I could hear him so clearly even without my headset on. To say the least, the airplane is very well insulated from the noise of the engines. Granted, the engines were idling, but the lack of noise was so substantial that it caught my attention almost immediately after the engines were running. While I’m not sure how quiet it is without wearing a headset on takeoff (maybe I’ll try it next time and see), it is excellent on the ground.

Another process the DA62 has simplified is the engine run up. In similar fashion to starting the engines, the run up consists of flipping a switch and holding a button for a few seconds. The switch tests to make sure that both of the computers controlling the engine are operating correctly. When switching to the backup computer, a slight momentary stutter in the engine serves as a physical indication letting the pilot know that the engine has switched from running on the main computer to the backup computer. This stutter would not normally happen when the system switches from the main computer to the backup computer, but the designers decided to program it into the software to alert the pilot. For the rest of the engine check, the throttles are left at idle, and then the run up button is pressed and held for a few seconds. During this time, the engine is throttling up on its own, checking the magnetos, and feathering the props; which is confirmed by the successive rise and fall in the rpm. After the engine self-checks everything, the G1000 screens are checked to make sure all the annunciations have cleared and the run up button is released. The other engine is then checked in the same manner. Again, the process has been simplified. 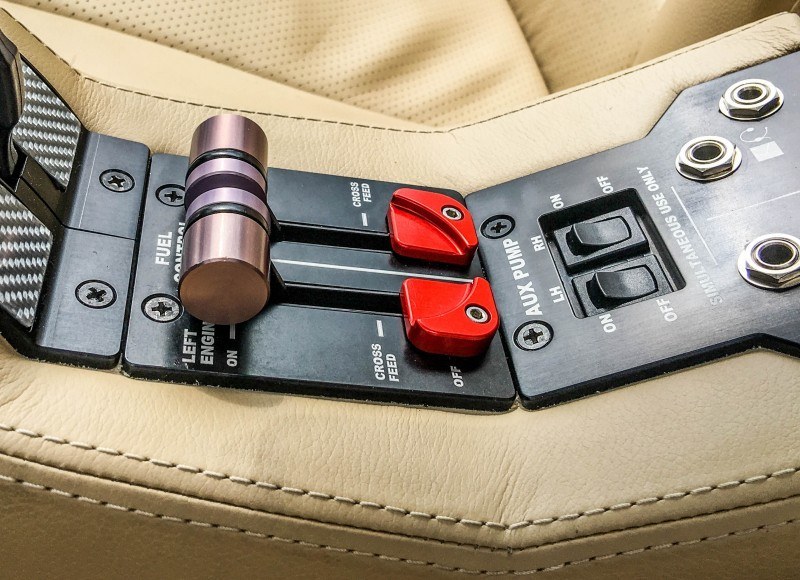 Enough of being on the ground, let’s get to the flying part. Taking off was a breeze, even though it was very breezy that day (wind was about 19 knots gusting to about 32 knots). It was a little bumpy getting into the air and climbing, but what can you expect on a warm afternoon near Houston. As far as flying the airplane goes, it feels great. The stick forces are light, and the airplane has a good response to the control inputs. Steep turns were fun; and the slow flight characteristics were just as expected – a little mushy but responsive. The stall characteristics of the DA62 are nice also. Our setup for the stall was throttles to idle, flaps to take off, and gear down. Pulling the stick back led to the expected slight buffeting of the airplane, signaling the onset of the stall. As we pulled the stick all the way aft to the stop, the nose of the airplane remained above the horizon and the aircraft just mushed down in a stalled condition. I didn’t take note of the descent rate, but I can say that the stall was very docile. So overall, the flight characteristics are solid.

After the normal operations air work, the demo pilot shut down the critical engine (the DA62 does not have counter-rotating propellers). For the engine shutdown, all that was required was to turn off the left engine master switch. As the engine shut down, the propeller auto feathered; so, gone are the days of ‘identify, verify, and feather’. To say the least, the airplane handled very well during single engine operations. We turned away from and into the dead engine with no problems. We then pitched the nose up a bit, and it had no problem maintaining a climb. The engine re-start was a piece of cake, and was accomplished by simply turning on the engine master switch and pressing the start button.

Mixtures, Props, Throttles… A thing of the past

With the single engine demo complete, we turned back for the airport (KCXO) when I realized something. The engines were in sync, and I hadn’t done anything the whole flight to sync them up! The engine controls consist of just the throttles, so there are no propeller controls to constantly tweak during the flight to keep the engines from producing that pulsating noise. Needless to say, the FADEC engine controls are another feature that makes the DA62 simple to fly.

With the flight almost concluded, we arrived at our 2 mile right base for runway 32 and lowered the gear and flaps. On final the flaps were fully lowered and I aimed for 85 knots on the airspeed. Now, remember that the wind was about 19 knots and gusting to 32 knots (you can verify that by looking at the wind sock in the picture below); so let’s just say that the round out for landing was a little squirrelly. But with the wind conditions and my lack of DA62 flight time being what they were, the airplane outdid itself again as I barely felt the mains touch down. The landing gear is that well designed. In a Cessna 182 or Piper Cherokee 180 the landing would have been fine, but the touch down would have been a little firm. Kudos to the engineers at Diamond for designing the gear in such a way that allowed me to walk away from the flight feeling good about the only landing I had a shot at.

The taxi in and shut down were both uneventful; fuel pumps off, avionics master off, and engine master switches off. That’s it; again, simple right? So, overall the flight was great; I don’t think it could have been better.

Hands down it is the best general aviation light twin that I have ever flown.

So, that in a nut shell is the review of my demo flight of the Diamond DA-62. Hands down it is the best general aviation light twin that I have ever flown. Just as cars have gone from standard to automatic transmissions, planes are becoming simpler to fly, thanks to innovative design and engineering by the folks at Diamond. A big thank you to Terry McGee and our demo pilot for taking me up in the airplane; it was a great experience! 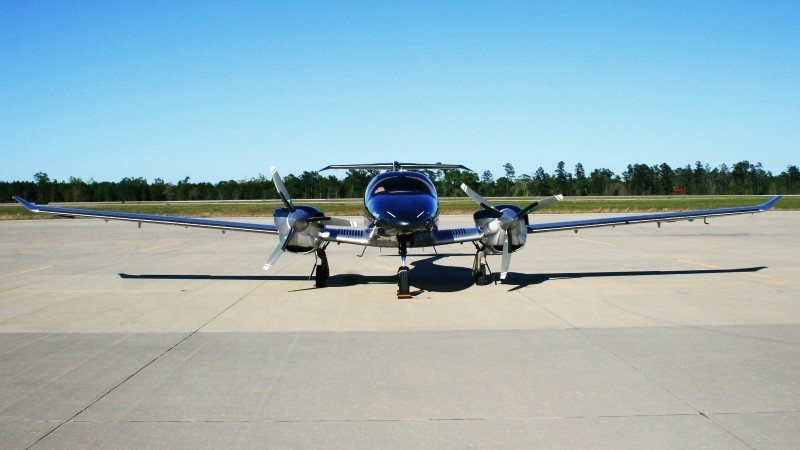