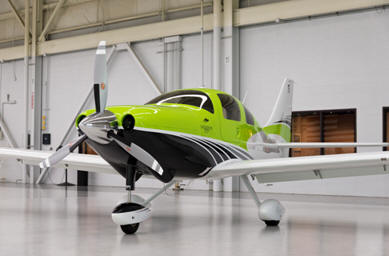 “The customers will now find out what we know, that the TTx is an aircraft which will wow pilots with its performance, and surprise passengers with its comfort,” said Brian Steele, business leader for the Cessna TTx. “Everything about it is fun, fast and sporty, while at the same time intuitive and comfortable. The G2000 avionics are so advanced and at the same time familiar. The interior appointments add a refined touch of class to the overall TTx experience.”

A high performance, all-composite aircraft, the TTx is designed for advanced pilots with advanced technology and greater comfort in mind. The leather-wrapped side-stick control and additional horsepower provide advanced TTx pilots with speed and performance close to that of a jet. The speed comes with style, as the fit and finish of the TTx has been likened to detailing reminiscent of a luxury sports car interior.

One of the customers accepting delivery is David Barnes, Chief Executive Officer of Watermark Retirement Communities. Barnes said he plans on using his TTx to travel between the 32 Watermark properties throughout the country. Representatives from Pacific Air Center (PAC) were on hand to assist with the event. PAC is a Cessna authorized sales center covering the southwest United States, with bases in Long Beach, Calif., and Scottsdale, Ariz.

Production line flow of the TTx was announced in April of 2012 at the Sun ‘n Fun International Fly-In and Expo in Lakeland, Fla. The aircraft has a top speed of 235 ktas (270 miles per hour), an operating ceiling of 25,000 feet and an optional Flight into Known Icing (FIKI) system, enabling pilots to file flight plans allowing for varying weather conditions. The TTx is the first aircraft to be equipped with the Garmin G2000 avionics system which features a glass cockpit with dual 14.1 inch high definition displays and touch screen controls.

“Cessna has a versatile, reliable workhorse in the 208 and the world’s dominant flight trainer in the 172, so it is rewarding to see an aircraft as unique and distinctive as the TTx leave the Cessna hangar to round out our single engine offerings,” said Jodi Noah, Cessna senior vice president of single engine/propeller aircraft. “In true Cessna fashion, the teams involved in delivering the TTx to the marketplace have placed quality and performance as top priorities, and they delivered.”