The iPad is taking over the world of aviation. So much so that, when a pilot says they don’t have an iPad, I always am dumbstruck by the fact. “You mean, you still use paper?” I ask. They usually sheepishly nod like they’ve been caught doing something wrong.

There’s nothing wrong with not having an iPad. It’s just become so commonplace for pilots to have them that it is unusual to find someone who doesn’t. I still know plenty of pilots who supplement their iPads with a printout of the approach they are planning at their destination. Printed plates are just a bit easier to handle in the cockpit than a normal size iPad (not so with the iPad Mini!).

Electronic logbooks have been around for years. I tried several times to put all my flight time into a spread sheet, but I started well into my flying career, so I had no desire to put all the hours in to document all my flights. I have a lot of friends who used the spreadsheet approach when they started flying, so they have a complete electronic record.

There are also a lot of websites that offer electronic logbooks. With the advent of the iPad, there are a number of Apps that have been developed to serve the market for electronic logbooks. The most popular, LogTenPro by Coradine Aviation, runs you about $80 for the iPad or iPhone and $100 for your Mac laptop.

LogTen is really pretty cool. It is the utter definition of an electronic logbook. You can log approaches easily, it will keep track of your currency, and it even lets instructors sign (and keeps track of the instructor’s information)! It truly is a paper replacement.

The annoying thing about LogTen (and any electronic logbook as stated above) is the time it takes to enter all of your past flights into the program. Depending on how long you’ve been flying, this could be a pain. Otherwise, I don’t have any complaints about it, nor have I heard any from other pilots. The one downside is the cost.

Have no fear, penny pinching pilot! MyFlightBook.com is here to help! I searched around for ages for a free, online, electronic logbook complete with an App that would sync everything. FREE being the key word. The other big criteria I was looking for was the ability to add up make and model specific flight time. 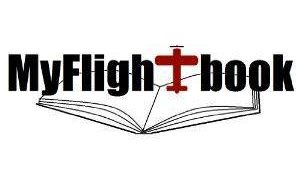 I did a search and sampled a few websites, but none that I was crazy about. Then I stumbled upon MyFlightBook. It was free. It could add up make and model specific flight time. It had an App. I was suddenly a happy camper.

MyFlightBook isn’t as complete as LogTen, but, for being free, it doesn’t skimp on much. You can input the tail numbers of the airplanes you fly and it will save them. It’s a simpler interface then LogTen (think taking all the columns in a logbook and putting them on a website), but it has what I need. I like it.

In conclusion, if you want to pay for LogTen, it’s a much more thorough electronic logbook. But, if you are going for the free and simple route, then MyFlightBook is your ticket.