Before we dive into any holding scenarios, I want to address ATC communications within a hold. A lot of pilots have difficulty with what is in an official hold clearance, what needs to be read back, and when and what to report. First, the actual hold clearance. According to the Instrument Flying Handbook, this is what to expect in a holding clearance:

Here’s a brief blurb on EFC times. The reason an expect further clearance time is so important is in case of a communications failure. Most holds are either because of weather delays or ATC delays (eg. flying IFR into an uncontrolled airport with another plane going to the same airport in front of you while ATC waits for that airplane to cancel his IFR flight plan). So, the pilot knows the rest of his route after the hold, meaning in case communications fail, the pilot departs the hold and flies the rest of his route. The most important thing is that this is what ATC expects, too. It is vital to get the expect further clearance time.

Students regularly miss the hold entry and exit reports. I regularly get on my students when entering holds because they forget to report the hold entry. Here’s the entry report:

And the exit report:

Holding With the Autopilot

A G1000 equipped with a KAP 140 autopilot unfortunately does not fly a hold hands off. It is possible to use the autopilot to fly the hold, but it is not a simple set and watch situation. The only way to get the KAP 140 to fly a hold is to set the autopilot in heading mode and each turn, the pilot must move the heading bug to the new heading on either the inbound or outbound leg. The pilot is still responsible for keeping track of the time on each leg (or the distance, depending on what is being used to determine the length of the hold).

The KAP 140 still requires the pilot to figure out the hold entry, direction and turning. If the hold is in the G1000 database, this helps with the workload because the hold will show up on the MFD. Otherwise, it’s pencil and paper time! 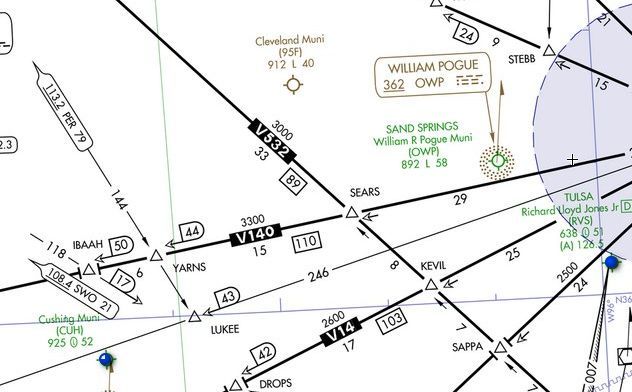 Jesse is inbound to the Sand Springs airport on V140. A storm just hit the airport causing conditions to drop to zero/zero. ATC advises Jesse of this and tells him they have a hold clearance ready.

Jesse pulls out his chart to figure out the hold. It’s unpublished, so he finds the Sears intersection first. He is approaching on V140 from the west and the hold would be southeast of the intersection. Jesse draws the hold on his chart, which would be on the west side of V532. After drawing the hold, he figures out that it would be a parallel entry. Jesse enters the hold and flies outbound for a minute. Once he initially crosses the hold, he reports the entry to ATC.

Once Jesse flies outbound for a minute on the airway, he makes a right hand, 225 degree turn to re-intercept the airway, flying inbound to the fix. After he passes the fix, he makes a left hand turn to fly outbound. Taking into account the wind, he flies outbound for a minute and fifteen seconds before turning inbound again. He makes three turns in holding before ATC instructs him to exit the hold and fly direct to the airport. Upon exiting the hold, Jesse reports the exit:

Holding doesn’t have to be hard! With a little work and some art skills, it’s IFR made easy!